UPDATED: Some of the most liberal Democrats in Congress want to spend up to $500 million MORE on policing Black communities – and they may not even know it

This post has been updated to discuss the newly-released text of one of the alternatives to the bill cosponsored by Senators Warren and Sanders.
In times like these, as we finally are forced to come face-to-face with what overpolicing does to impoverished communities of color, who in the world would want to spend even more money on such policing?

Some of the most liberal members of Congress, that’s who.  People such as Sen. Elizabeth Warren (D-Mass.) and Sen. Bernie Sanders (D-Vt.), along with 16 other Democratic senators. (One of NCCPR’s founders, the late Elizabeth Vorenberg, was a longtime friend of Sen. Warren.)

This is happening because of a fundamental failure among my fellow white liberals: the failure to face up to the fact that child protective services agencies are a police force – and their power to oppress individual families, and entire communities of color, is as great, if not greater, than that of the police who wear blue uniforms. 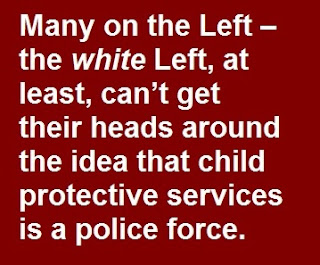 CPS investigators have more power than police.  Effectively, they can enter homes and stripsearch children without a warrant. Say no, and they can come back with the police and even break down the door. Even when the entry is less drastic, the terror of the investigation is something a child may never forget.  More than half of Black children will endure such terror during their childhoods.  That’s best case. Worst case: the CPS caseworker takes away the children on-the-spot without so much as asking a judge first.

Almost always, the trauma is inflicted on all these children for nothing – the report was false.  In most remaining cases the alleged problem is neglect – which often means poverty.

As the Movement for Black Lives explains:

The child welfare, foster, and family court system (“the foster system”) is thus a major site of policing, control, and punishment of poor Black women, starting at conception.

Many white liberals have been blind to this. They persist in thinking of CPS agencies as benevolent helpers.  In Black communities they know better. As Kendra Hurley wrote in Citylab:

Some parents living in neighborhoods with historically high rates of child welfare investigations say the dramatic dip in maltreatment reports [due to COVID-19]  feels more like the pollution lifting — a much-needed respite from the intense and relentless surveillance of low-income moms, and especially those who are black and Latinx. …

"Poor people are usually constantly inspected by all these agencies,” [one mother] said. “Now there is kind of a peacefulness.”

But this isn’t new. In a rare examination of this other police force in 2017, The New York Times documented case after case of bias in the system, calling foster care the new “Jane Crow.”

One other problem with the child welfare surveillance state: It hasn’t stopped child abuse. 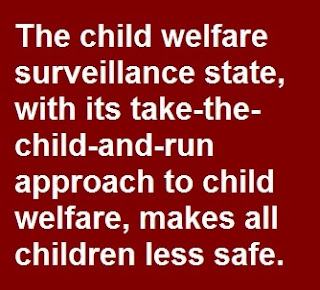 On the contrary, workers are so overloadded with false allegations and cases in which family poverty is confused with neglect that they have no time to investigate any case properly – and that is almost always the real reasons for the extremely rare horror stories that make headlines.  At the same time, if poor people need help, they must seek it from people mandated to turn them in to the child abuse police. That, of course, makes them reluctant so seek such help.

What the bill would do

Yet now, even as many on the Left say we should  “defund the police,” some of America’s most liberal senators are pushing the federal government to spend up to $500 million more on the child abuse police. The $500 million is part of a bill that also includes another $1 billion in child welfare spending that is problematic because of  the funding stream that must be tapped in order to get it.

All of this money is a small part of a yuuuuge spending bill - $430 billion in all - to cope with the effects  the effects of COVID-19.  Of that amount, I,  and I suspect most other liberals, would probably favor the way the sponsors propose to spend at least $428.5 billion.  That’s because none of that money goes to furthering the overpolicing of poor communities.

But up to $500 million would be spent, via the Child Abuse Prevention and Treatment Act (CAPTA), to “support child welfare workers in preventing, investigating, and treating child abuse and neglect …”  This $500 million is specifically targeted toward the child abuse police, the investigators who exercise the vast powers described above. The way they “treat” child abuse often is by tearing apart families or placing them under onerous, harmful surveillance.

But that’s not the only problem. These funds are funneled through  the worst part of a bad law, Title I of CAPTA.  CAPTA was, literally, designed to avoid facing up to the issues of racial and class bias that permeate child welfare.

And CAPTA encourages laws and policies that terrorize pregnant women away from seeking prenatal care, and inflict needless foster care on children during precisely the time in their lives those need their families most – their infancy  (The Senate bill also includes another $1 billion via Title II of CAPTA, which has less onerous requirements.)

That’s why groups such as Movement for Family Power call for repealing CAPTA. 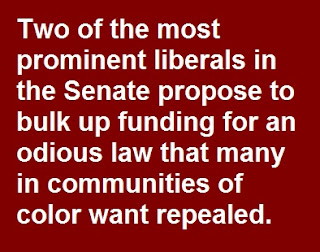 The only thing that has prevented CAPTA from having an even more devastating impact on communities of color is the simple fact that there is not much money in it, so there is not much incentive for states to knuckle under to its mandates.  But now, two of the most prominent liberals in the Senate propose to bulk up funding for an odious law that leaders of color want repealed.

How did this happen?

Neither Warren nor Sanders specializes in child welfare issues, and the child welfare component is a tiny part of a much larger spending bill.  And, as noted above, many on the Left – the white Left, at least, can’t get their heads around the idea that child protective services is a police force.  Odds are these senators’ staffers saw that the usual liberal child welfare establishment groups, like the Child Welfare League of America, are for it, so that was good enough for them.

But that is no longer good enough.  A predominantly white liberal child welfare establishment have built a system on a foundation of racial and class bias.  (They’ve had plenty of help from an assortment of white conservatives, such as Newt “bring back the orphanage” Gingrich, and Naomi Schaefer Riley, who crusades to tear apart more families from her perch at the American Enterprise Institute.)  No United States Senator should sign on to any child welfare legislation until they’ve actually listened to the communities upon which the full force of that legislation will be inflicted.

In the short run, here’s what Sanders, Warren and the other Democrats who have co-sponsored this bill could do to genuinely protect vulnerable children:

● Take the $1.5 billion and move it out of CAPTA and into programs that ameliorate the worst aspects of poverty, such as increasing the amount allotted in the bill for child care and providing serious support for housing, which is barely mentioned in the current bill. 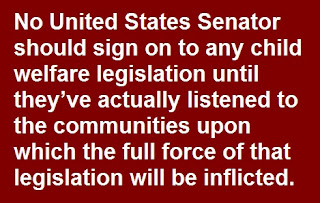 ● Four other Democrats also have a bill that would be better – though there’s a catch.  Actual language is not yet available, but it appears that a key provision of the bill would give child welfare agencies $2 billion they could spend either on good things – like transportation, housing and utility payments and/or further policing poor people of color, and destroying their families forever. That’s because this money also could be spent “to expand adoption promotion and support services, or to hire, train and support caseworkers to conduct safe in-person home and remote visits, including the purchase of personal protective equipment and technology.” [UPDATE, JULY 14, 2020: The bill language is now available and the news is pretty good.  For starters, none of the money is funneled through CAPTA.  And the bill says that states "shall expend significant portions of the funds" on a variety of child welfare services almost all of which range from harmless to beneficial, so relatively little would go to the policing functions of child welfare.  However, the bill puts very little emphasis on keeping families together and it implies that if children are placed in kinship foster care with relatives, somehow that is not foster care. It is.]

● If Democratic senators absolutely must put the money into programs that are part of the child welfare system, move the $1.5 billion out of CAPTA and into the Promoting Safe and Stable Families Act – specifying that the new funding must go only to the family preservation and family reunification portions of that law.  [UPDATE: The bill discussed in the preceding paragraph does not go that far. It funnels the money through Title IV-B - which includes the Promoting Safe and Stable Families Act, but the funds also can go to adoption and hiring more caseworkers. And, as noted above, the description of services to be funded by that bill says little about family preservation.]

● Eliminate the accidental windfall for foster care created by earlier COVID-19 legislation. That legislation increased the percentage of Medicaid costs reimbursed to states by the federal government. That’s a good idea.  But whenever you change that formula for Medicaid it automatically changes the formula for foster care aid as well.  This new bill should roll back the foster care increase, while maintaining it for Medicaid
Posted by National Coalition for Child Protection Reform at 11:00 PM