Would a Senate bill (accidentally) end child abuse investigations in some states and counties?


Probably not. But the bill reveals how little lawmakers know about how child welfare really works.

Last week I updated a previous post to this Blog concerning various proposed federal legislation to provide more money to child welfare in response to COVID-19. The update concerned a bill for which the full text was only recently released.  It’s called the “Child Welfare Emergency Assistance Act” and it’s sponsored by four Democratic Senators.

The update dealt with how governments would be allowed to spend $2 billion in additional federal funds.

But there’s another intriguing provision of the bill. It’s called “Requirement for De-escalation Strategies Relating to Interactions With Law Enforcement Authorities.” It requires governments to

(A) develop and implement de-escalation strategies to—

(i) reduce unnecessary interactions with law enforcement authorities for children, youth, and families coming to the attention of child welfare agencies and for children and youth in foster care; …

(iii) ensure that any involvement of law enforcement authorities in child abuse or neglect investigations, child welfare interventions, placement incidents, or court or administrative proceedings involving children or youth in foster care, is not coercive or intended to intimidate … 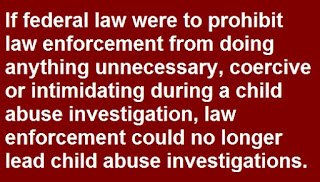 There is no action government can take against a family that is more coercive than tearing it apart and consigning the children to the chaos of foster care. The threat of such action is pretty intimidating.  And almost all interaction between child abuse investigators and families is unnecessary since at least 80 percent of all reports they investigate – and probably far more – are false.

Of course even if such a bill became law – and it almost certainly won’t – the investigations wouldn’t really stop. At most, they would be transferred back to state or local child protective services agencies.  But Florida’s record suggests that would make no difference.

In Florida the change was made with the hope that it would lead to more children being taken from their families. The theory was that hardnosed cops wouldn’t be “fooled” by those awful parents who could sucker bleeding heart caseworkers.

In fact, when the transition was pending I heard such hopes – or fears, depending on who was expressing them -- and I said at the time nothing would really change.  At this time Florida was in the midst of one of its periodic foster-care panics. Workers already were rushing to tear apart families needlessly; turning over the job to people who might have some concept of things like “evidence” wasn’t going to make things worse.

Although it’s been a while since I’ve checked, as far as I know that turned out to be correct. I know of no pattern showing that counties where sheriffs do the investigating are more likely to take away children than areas where the responsibility remains with the Florida Department of Children and Families.  They’re equally awful.

That’s something sponsors of this bill, and all those rushing to suggest that money saved from defunding the police should be plowed into social work, need to understand. In child welfare, the caseworkers are the police.  They exercise the ultimate coercive power over another human being and they have more leeway to do it than the police who wear blue uniforms.

Consider another example from Florida: When law enforcement wanted to sneak into a home to do a search for marijuana plants but couldn’t get a warrant, they pretended to be DCF caseworkers because they knew the family wouldn’t dare keep them out!

As Professor Dorothy Roberts of the University of Pennsylvania Law School, a member of NCCPR's Board of Directors has written:

I am concerned by recommendations to transfer money, resources and authority from the police to health and human services agencies that handle child protective services (CPS). These proposals ignore how the misnamed “child welfare” system, like the misnamed “criminal justice” system, is designed to regulate and punish black and other marginalized people. It could be more accurately referred to as the “family regulation system.”

What we really need are laws that force CPS agencies to de-escalate their own attacks on families – attacks that often destroy children in order to “save” them.
Posted by National Coalition for Child Protection Reform at 11:00 PM