Racism in child welfare explained in one easy lesson


A case from Virginia illustrates the perils of Parenting While Black

A lot of people in child welfare get defensive when the whole issue of racial bias comes up. In fact, they’re so defensive that there’s a whole group within the field that claims it is magically immune from such bias.

The data, of course, show otherwise.

But the defensiveness is understandable.  I doubt very many child protective services workers spend their nights wearing sheets and burning crosses.  They don’t use racial epithets.  And some of their best friends … well, you know.

But racial bias in child welfare is far more subtle.  That makes it harder to explain.  Until a family defense lawyer comes along and explains it perfectly.

Valerie L’Herrou is a staff attorney at the Center for Family Advocacy in the Virginia Poverty Law Center.  She told the story to journalist Elizabeth Brico for a story for Prism.  (Brico, by the way, does outstanding reporting and writing about child welfare, even as she carries a burden borne by few, if any, other journalists covering this issue: She’s fighting to get her own children back from child protective services in Florida.)

“I was speaking to an African American judge who said she had a case where Social Services came to her to seek removal of a child because this mother had smacked her child right in front of a police officer,” recounts L’Herrou. The social worker interpreted the incident as indicative of extreme violence in the home. Essentially, if the mother would behave this way in front of the police, what would she do behind closed doors?" 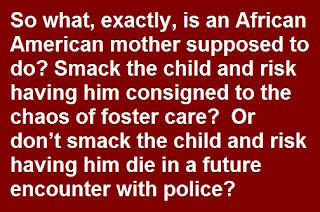 I could stop recounting the story here and now and every person of color reading it would know exactly why the mother did what she did.  But for the benefit of my fellow white people, especially those who work in child welfare:

In a few years, if that Black child, now a teenager, mouths off to a police officer he could wind up, at best, thrown up against a wall, and at worst – dead.

What the judge knew

In the case cited by L’Herrou, the judge understood the dilemma and did not take away the child. This judge believes that education, not removal, is what’s needed for families when the parent is trying to be protective but may appear abusive to those who don’t have better cultural understanding.  But how many judges, especially white judges, would have understood?  How many would have jumped to the same faulty conclusions as the caseworker?

And not just child welfare.  Even in their current reduced size, almost every American newsroom probably includes reporters and editors who have been or are or, at least, have personal friends who are child abuse investigators, foster parents, adoptive parents, and/or CASA volunteers.  How would our whole understanding of child welfare be different if there were more journalists like Elizabeth Brico?
Posted by National Coalition for Child Protection Reform at 11:00 PM