● The Chronicle of Social Change is tracking the issues child welfare agencies will have to deal with during the COVID19 pandemic.  And family defender Amy Mulzer has a tweet thread predicting how those agencies will deal with it: Badly.  UPDATE: And, as if to prove Mulzer right, a judge in Arkansas is cutting off in-person visits between foster children and their parents - just when they need the comfort of their own families the most: 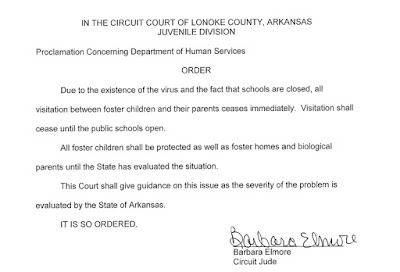 ● Late last year, the Kansas City Star tracked down what happens to former foster youth by going to where so many of them can be found: Jails.  Over and over they talked about what the system had done to them and, often, about how they never needed to be taken from their own homes.  It is a testament to the power of those stories that some in the child welfare establishment, and right-wing allies such as Naomi Schaefer Riley (who proudly compares her work to that of Charles Murray – yes, that Charles Murray), are desperate to try to undermine the findings.  Riley even tried to dismiss the lived experience of foster youth themselves.  I have a blog post about it.

● A lawsuit in Pennsylvania illustrates so many of the problems in child welfare, from the persecution of certain mothers who smoke pot – or simply are wrongly accused of it – to how everything is made worse by “predictive analytics.” I have a blog post on it, with a link to the lawsuit.

● And there’s still another story about still another “child abuse pediatrician” allegedly out of control. This time it’s from the Wisconsin Center for Investigative Journalism – but you really should read it if you’re in Alaska.
Posted by National Coalition for Child Protection Reform at 9:03 AM