Child welfare, civil liberties and the failure of the Left: The double standards apply to blacklists, too

In a previous post to this blog, I wrote about a New York Times story that described how police swarmed a middle school and conducted highly-intrusive searches of hundreds of students looking for drugs. They found none. They also had no warrant or other authority to conduct the search.

I noted that this prompted outrage on the Left, a successful lawsuit, and even criminal charges. Yet similar behavior is routine, and often countenanced by self-proclaimed liberals, as long as it’s done by child protective services workers in the name of fighting child abuse.

The Times provided still another chance to examine double standards last month. This time it came in the form of a deeply-moving op-ed column by Tamar Manasseh, founder and president of Mothers Against Senseless Killings.

She writes about her son.  Though he has never been in trouble with the law, Manasseh writes …

He and I constantly fear that one day the Chicago Police Department is going to put him in its gang database, which contains names of 130,000 people suspected of being gang members. If they put your name in it, they aren’t required to notify you. And then if you get stopped by a police officer, there’s a good chance you’re going to end up in jail because it’s so easy for the police to come up with a reason to arrest you. Being in the database can even make it hard to get jobs or professional licenses because employers might find out when they run background checks.

Chicago’s gang database … sweeps in young people who are “likely offenders.” In reality, anyone can get on the list, and for reasons like dressing a certain way, having tattoos or just sitting on their porch at the wrong moment. It’s depressing but unsurprising that more than 90 percent of people in the database are black or Latino, a majority of whom have never been arrested for a violent offense or for a drug or weapons charge.

Once again, there was a lot of sympathy in the comments section, and, I’m sure plenty of concern among my fellow liberals.

The other database of rumor and innuendo

But once again, many liberals are silent – or worse – when it comes to another kind of massive database of rumor and innuendo that also harms children and families: “central registries” of alleged child abusers. 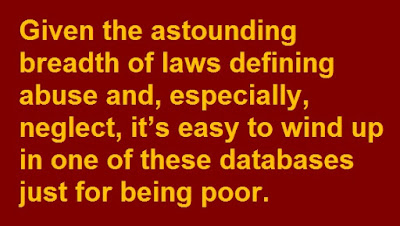 As with that database maintained by the Chicago police, it’s a whole lot easier to be put into one of these registries than to fight your way out.  No actual conviction is required. In most states there is no hearing of any kind beforehand.  The family gets no opportunity to defend itself at all.  Typically a caseworker need simply decide in her or his own mind that it is slightly more likely than not that the accused is a child abuser, and the accused is in the database for years, maybe decades, maybe forever. (In some states they are listed even when the caseworker thinks there is more evidence of innocence.)

And let’s be clear about what is meant by “child abuser.” Given the astounding breadth of laws defining abuse and, especially, neglect, it’s easy to wind up in one of these databases just for being poor.

In some states, there is a long, cumbersome bureaucratic appeals process, usually involving appealing to the same agency that put you in the registry in the first place. In other states, there’s no way out at all.

So it’s no wonder that evidence from class-action lawsuits indicates these registries are rife with error. In New York and Illinois such lawsuits revealed that when people finally make it through the slow, cumbersome appeals process they win 75 percent of the time. (NCCPR’s vice president brought the New York suit.)  In North Carolina and Missouri state supreme courts ruled that the very idea of blacklisting someone first and forcing them to appeal afterwards was unconstitutional. Those courts ruled there must be a hearing before a listing in a central register.

And, as with the Chicago police registry, the victims of this massive infringement on civil liberties often are children.

For starters being listed on a central registry often means you can’t get a job in any field dealing with children. So when an impoverished parent is wrongly listed on the registry it further limits his or her job prospects, increasing the chances that the family will have to endure all the harm of poverty. 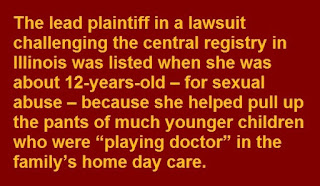 But the harm can be even more direct.  The alleged perpetrator isn’t always an adult. The lead
plaintiff in the Illinois lawsuit was listed when she was about 12-years-old – for sexual abuse – because she helped pull up the pants of much younger children who were “playing doctor” in the family’s home day care.

Yet who was front and center a few years ago in demanding that all these sloppy, slipshod databases be combined into a massive national database of rumor and innuendo? None other than that great champion of liberalism, Sen. Chuck Schumer, D-N.Y.  Judging by his quote in this AP story, (which also has an excellent overview of all the problems with central registries), Schumer did not even seem to realize that child abuse registries are nothing like registries for sex offenders which require a criminal conviction before anyone is listed.

Once again, however, hypocrisy is not a one-way street.  I haven’t seen family values conservatives rushing to demand curbs on the Chicago police gang database either.
Posted by National Coalition for Child Protection Reform at 11:00 PM