The tattletale factor in “child welfare”

It’s why all those plans for kinder, gentler family policing won’t do much good – and might even backfire.  Connecticut is a case in point.

It seems like a week doesn’t go by without some “child welfare” agency announcing an initiative that supposedly will make family policing kinder and gentler.

There’s the longstanding “differential response” in which, in cases deemed less serious, caseworkers are sent out to do a supposedly family-friendly “assessment” and offer voluntary help, instead of an investigation with the accompanying risk of onerous surveillance.  On the one hand, there are a lot of reasons to be concerned that this leads to needless net-widening. On the other hand, another in a long line of studies suggests it may reduce foster care entries.

Then there are “family resource centers” – drop-in centers, in which families can stop by and get help, including the concrete help families really need.

But for these and similar interventions there is one huge catch:  Call it the tattletale factor. 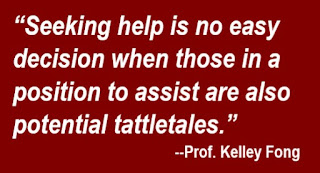 All of these alternatives are either run by the family police themselves or contracted out to agencies whose workers are mandatory reporters of “child abuse” and “child neglect.” At worst, this can wind up widening the net of needless intervention into families.  At best, this creates a deterrent to families coming forward to seek help because they never know if the “helper” will feel compelled to call the family police.  Prof. Kelley Fong, who’s done extensive research on this issue, summed it up in an article for Family Integrity and Justice Quarterly:

“Seeking help is no easy decision when those in a position to assist are also potential tattletales.”

The tattletale factor persists because no state or locality creating these plans has taken the one step necessary to make them work: surrendering some of their vast, untrammeled power to intervene in the lives of families.

And that brings me to something included in Connecticut’s plan for how to use funds under the federal Family First Act.  Here’s how The Imprint describes the plan:

The state is planning to support a community-based organization that will help steer some reports away from its surveillance-oriented hotline, known as the Careline.

Funding for this venture — described wonkily in the Family First plan as a Care Management Entity (CME) — has already been included in the state’s budget negotiations this year, and department leadership are confident it will secure about $1.5 million for this venture.

“We want to go further upstream and serve families without having them become known to us … and really do prevention in a more robust way other than cases accepted,” said DCF Deputy Commissioner of Operations Michael Williams.

The idea is that reports of concern that do not rise to the level of abuse or neglect would come to the CME from schools or child care centers, law enforcement officials or the community. Parents could also come directly in search of help.

The effort is probably sincere.  It may have been inspired by Prof. Fong’s research, some of which was done in Connecticut.  And when it comes to reducing needless foster care, over the past decade or so, the Connecticut Department of Children and Families has shown some real leadership and done better than other states (although using the Orwellian term “Careline” to describe the number you call to reach the family police does not inspire confidence).

But the closer one looks at the fine print, the less there is to Connecticut’s plan.

For starters, the claim that this entity will “serve families without having them become known to us”
isn’t quite accurate.  Under the plan, mandated reporters will keep right on calling the policing line (no way I’m calling it “Careline”).  Then, if the family police decide the report doesn’t rise to a level that needs investigation, the reporter will be told to call the CME instead.

So this means that a second entity will, in fact, go out and knock on a family’s door in situations where that does not happen now, thus reinforcing fears that Family First opens the door to making needless intervention into families worse.

And while it’s true that, in theory, this new entity is only there to help, there’s another catch: According to the plan “CME staff are mandated reporters and if they hear something that meets the statutory criteria of abuse or neglect, they will refer to the [family police].”  Why, then, should families be less afraid of the CME than they are of any other mandated reporter?

Prof. Fong describes parents forced constantly to weigh whether to reach out for help and, if they do, what they dare not say to “helping” professionals:

In communities highly exposed to [child protective services], the specter of CPS accompanies families to doctors’ visits, to parent-teacher conferences, to homeless shelters, to therapy

Appointments … Parents in need face a no-win situation: close off opportunities for support or open themselves up to the risk of state scrutiny and family separation.

A far better approach would be a plan that said: “We will seek legislation exempting CME staff from mandatory reporting requirements.”  That doesn’t mean they’d be prohibited from reporting, only that they’d be free to exercise their professional judgment without fear.  But that would require the family policing agency to relinquish some of its power. 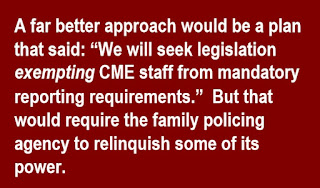 A good plan also would have included a provision allowing “mandated reporters” to fulfill their legal obligations by calling this new entity instead of calling the family police.  But that, too, would require the family policing agency to give up some of its power.

The fact that this proposal is part of Connecticut’s plan to implement the so-called Family First Act creates additional problems.  Family First will only help states pay for a service if the service is provided for families where children are, using the law’s own Orwellian term, “candidates” for foster care.  That creates even more entanglement with the family police.  As the proposal itself says:

…the CME will be expected to conduct an assessment protocol for all families coming through the CME. This will include 1) an evaluation of safety; if there is a safety concern the CME will make a call to the Careline for further evaluation, and 2) an assessment of risks, strengths, and needs to inform case planning, and service matching…

So how can this be purely voluntary, if the family must allow all that “risk assessment”? Will a family that says: “no, thank you, we’re not interested” automatically become higher risk?  And how does all this constitute serving families “without having them become known to us”?

At best, this seems no different from differential response, at worst is it simply subcontracting child abuse investigations by another name?

Why entangle this with Family First at all?  Surely the richest state in America could come up with the $1.5 million needed for the CME without federal reimbursement. [UPDATE: I now understand the state is, in fact, going to come up with that $1.5 million without Family First.] As for Family First eligible services, with the strings that attach to them, savings from reduced foster care would cover the costs of any services the CME might arrange.

A better approach would be to take the money the state would spend on the CMEs and give it to community-based community-run service providers, no strings attached, and let them figure out how to reach out to families and help them – in other words, what happened in New York City, not by design but by way of COVID-19.  But that would require the family police agency to relinquish some of its power.

Short of that, there is one thing that would make this plan far more reassuring: If the mandate for the CME included immediately linking the family to high-quality interdisciplinary legal representation.

But that would require the family police agency to – well, you know.

Posted by National Coalition for Child Protection Reform at 3:40 AM