UPDATE: Nationwide confirmation for what happened in New York City can be found in this article, just published by the ultimate establishment source, JAMA Pediatrics. (Subscription or "rental" required.) The headline says it all: "Child Physical Abuse Did Not Increase During the Pandemic"

I began last week’s weekly review of family preservation news and commentary with this video:

It’s from a panel on narrowing the front door to the family policing system.  The focus was New York City, but it’s just as applicable anywhere else in America – indeed, in most places the harm done by family policing is even greater and even more widespread.

The centerpiece of the event was a presentation, starting at 17:54 on the video, by Prof. Anna Arons of New York University School of Law, in which she summarized her landmark study “An Unintended Abolition.”  The study found that when COVID-19 forced the city’s family policing agency, the Administration for Children’s Services, to step back and community-run community-based mutual aid organizations stepped up, the trauma of needless investigation and foster care was significantly reduced, with no compromise of safety.

Even the ACS Commissioner confirmed it.

On the harm done by needless investigation:

These investigations even if they don't end up in family court are incredibly invasive and even if they don't result in a separation, we have an agent of the state who's entering families’ homes often unannounced in the middle of the night, demanding to see the child's nude body, demanding to look in every cabinet, and it's just a terrifying experience for any person to go through, even if that's the end of it. And for most families that is the end of it, in that 65% of reports, even before COVID were not substantiated. … This trauma is induced for this whole family, and then ACS finds no evidence to support the report whatsoever.

Who is most affected?

If we're looking back at the family regulation system at each stage from investigation through filing, 90% of reports received [in New York City] are about families who are Black or Latinx.   They're hugely disproportionately in neighborhoods that are lower income. So even if we are going to control for poverty, there is still an overrepresentation of for black and Latinx families at every stage of the system.

What COVID changed – and the dogwhistling that followed 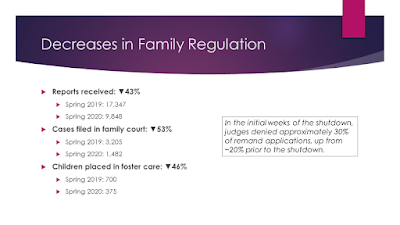 First was just the shutdown of in-person schooling, which reduced the contact between children and this army of mandated reporters.  [Then we saw] reflected in the media at the time all of these narratives of children are going to be locked away at home, out of the eyes of mandated reporters.  We can also see that as [the] dog whistle it is, for not all children are we concerned about  - we were concerned about Black and Latinx kids who are being trapped at home with these parents who we in the predominant narrative are going to argue, have to be monitored in order to keep their children safe; they can’t be trusted to do that.

[NCCPR has more about this false narrative here.]

What the drop in foster care suggests

The drop outpaced the drop in reports alleging abuse and neglect. As Arons explains:

This significant drop in foster care seems to indicate first that ACS itself began assessing more rigorously whether it was in fact going to go to court and request a removal and it seems to have held off on filing cases where it might previously have sought removal … We also had judges at least initially granting fewer applications, even when ACS did request them, which would seem to indicate that judges were paying a bit more attention to this key factor for removal: whether there is harm or the risk of harm to the child that would be outweighed by the harm that was going to be enacted by removal itself …

And this to me seems to show that the ACS claim [and] the family court claim that it only had previously used removals as tools of last resort is just not true … That would seem to show that in past years we have a huge number of children … who were taken from their family, for no reason. [They] could have stayed at home with their family, and yet the city still removed them and judges still approved of those removals. … 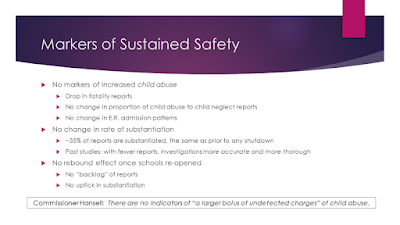 By last summer ACS itself, through its commissioner … acknowledged at a city council hearing that he too had come to the conclusion that there had been no increase in child abuse or neglect, and it did not seem that this narrative of children being trapped at home with their abusive or neglectful parents had actually been borne out. …

And finally, looking forward  … we also now can say that there has been no kind of observable rebound effect.  Even now, as children are back in school, while the number of reports received creeps back up to what it was prior to COVID, there has not been any kind of bubble any increase in the number of reports as if teachers were reporting abuse or neglect that had gone unnoticed in the last year. …

What accounts for these results?

This is also a period where we have had more government assistance to families with fewer strings attached than essentially any other period since the New Deal. … [These programs] they do have the benefit of giving families the autonomy to receive funds and spend funds the way they would like to … fully outside the auspices of the family regulation system.  So unlike something like preventive services where, if you're accepting aid from ACS … you're also accepting ACS into your home to monitor you and police you and to accept X, Y or Z condition that goes along with that. This is just families getting money to spend as they see fit, much like we already give to, for example, foster parents, when they are caring for children.

At the same time, we also have this huge growth in mutual aid projects … to a large degree able to take control of their own redistribution of wealth to some extent, and able to help their neighbors with everything from providing diapers, clothing and provisions like that to each other as well as services like counseling childcare, things like that.

All of that to me feels like the path forward.  How do we solve child neglect, how do we keep children safe in this country?  We give families money.  We give families money so they can keep their own family safe. And so, we are not requiring the government to come in and police them and say this is how you need to raise your children. 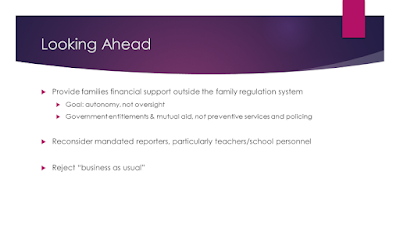 And I think finally … as we creep back to the system as we saw before, I would just urge us all to kind of reject this notion that we need to return to business as usual.  … If we are going to return to a world that looks more like the world that we were in before that doesn't mean accepting all of these abusive practices of policing that are still continuing to target Black families and poor families and Latinx families and police and surveil them.  Instead, we need to move to a future and call for a future where those families are able to care for themselves the same way that all families should be able to.

Posted by National Coalition for Child Protection Reform at 11:12 AM