● Last week’s round-up began with this photo at the site of a Martin Luther King Day rally against the oppression of families by New York City’s Administration for Children’s Services. 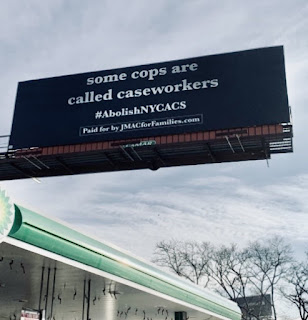 I noted at the time that I had not yet seen a story about the rally.  Here’s the story, from The Imprint.  Perhaps most notable are the comments of a supervisor for ACS.

One rally attendee who has worked at ACS for more than a decade said that agency workers use parents’ fear of having their children taken away to gain their cooperation and get access to information for the investigation.

“We take advantage of families’ ignorance,” said Robert, an assistant supervisor in Brooklyn, who asked to be identified only by his first name to avoid reprisal at work. “If I knock on your door and you won’t let me in, I’ll say you have a right to do that, but most of my co-workers paper over that fact to get their job done.”

Robert argued that meaningful reform can only be achieved through policy changes, rather than through efforts like implicit bias training that focus on changing workers’ attitudes. For example, he said, if child protective investigators had to get a warrant from family court every time they wanted to enter a home, “that would bring the system to face a crisis of legitimacy and have the rebuilding of it to be a caring system and not a policing system.”

● Whether it’s in the context of the police in blue uniforms or the family police, say the word “abolition” and people understandably worry about what should be done instead.  The writers and editors of Rise have some excellent answers in this column for the federal government’s Children’s Bureau Express.  The column serves another useful purpose: Multiple news organizations have debunked the false, racist myth that the lack of mostly white professionals constantly watching mostly nonwhite kids would lead to a “pandemic of child abuse.”  The Rise story helps explain why that didn’t happen, and why no one ever should have expected it to happen.

In the same issue of Children’s Bureau Express:

-- Jey Rajaraman, chief counsel for Legal Services of New Jersey, writes about why “Securing and Restoring the Family Is in the Child’s Best Interests.”

She quotes a former foster youth who …

… identified how not having the "perfect house" delayed reunification and that the agency would not financially assist her mother to locate a home for her and her siblings. Why can't state agencies provide direct funding for concrete services to assist in reunification? In New Jersey, statutes provide and fully empower the agency to assist with housing for parents and other needs to expedite reunification. However, this does not occur in practice because there is no shift to make securing the entire family a priority.

-- David Kelly, special assistant to Jerry Milner, who ran the Children’s Bureau under the previous administration, writes about how the key to preventing the problem of children “aging out” of foster care is to prevent so many from ever aging in.  He writes:

It's time to aggressively interrogate the option of aging out. It's time to examine deeply the root causes of how we reach the point where a young person's best or only option is to leave care for life on their own. It's time to interrogate how we've arrived at a place where programs such as Chafee [which helps support independent living programs for youth who age out] are needed in the first place.

Rather than interrogate aging out, we've institutionalized it. …

That we have a higher percentage of young people who age out than go to live permanently with other relatives is abhorrent; it is a tragedy. … We should incentivize family preservation, reunification, kinship care, and guardianship instead of adoption alone.

To accept aging out as an unavoidable byproduct of the foster care industry is to perpetuate injustice. … To accept our failure to find permanence and connection for young people—after we have taken it from them and promised better—is unforgivable.

Like all political appointees, Kelly’s boss, Milner, had to submit his resignation.  But the job of running the Children’s Bureau remains open – and if you’d like to see the Biden Administration bring back one of the most progressive leaders in the Bureau’s history, there’s a petition you can sign here.

● Even when children are not taken from the home, or after a family has been reunified, child welfare systems make family problems worse by needlessly blacklisting parents on “central registers” of alleged child abusers based on little more than a caseworker’s guess.  The listing can bar the parents from employment in many jobs – often among the few jobs open to low- income families.

Blocking off the ability of parents and caregivers to access employment in high-growth fields only serves to hurt the very children the child abuse registry is supposed to protect in the first place. The child abuse registry thus exacerbates child poverty and places vulnerable families in even more precarious circumstances.

They explain what the Biden Administration can do about it.

● Sharon McDaniel, founder, president and CEO of A Second Chance, Inc. also has a child welfare agenda for the Biden Administration, one geared to finally coming to grips with the racism that has been a part of American child welfare since before there was even an America.

●Something else the federal government could do (but almost certainly won’t): cut off all grants to Court-Appointed Special Advocate (CASA) programs.  Still another report, this time from Florida, adds to the mountain of evidence that these programs harm children. I have a post about it on this blog.

Posted by National Coalition for Child Protection Reform at 10:51 PM