The clueless CASA program of Florida

● A legislative audit confirms they have no evidence the program is doing any good; the data range from unreliable to nonexistent.

● The audit reviewed the scholarship on CASA and found what anyone who looks objectively at the literature is likely to find.

● Lawyers surveyed found what you almost always find with CASA programs: a profound bias against families that harms the children such programs are intended to help.

● It all echoes a study of the same program done nearly two years ago which produced similarly dismal findings.

In the closing days of 2020, the Florida Legislature’s equivalent of the federal Government Accountability Office issued a report on Florida’s CASA program. (In Florida, it’s called a Guardian ad Litem (GAL) program, but it is, in fact, a CASA program.)

CASA is the program in which overwhelmingly white middle-class amateurs – volunteers whose only real “qualification” is their race and their class – march into the homes of overwhelmingly poor, disproportionately nonwhite families to pass judgment upon those families. They recommend what hoops parents will have to jump through to have any hope that their children will get to live with them again.  They recommend if the parent/child bond should be legally severed forever.  Judges often are quick to rubber-stamp their advice.

What could possibly go wrong?

CASAs could play a useful role as mentors for foster children and in finding extended family members when children really can’t remain in their own homes.  But they should not be allowed to “investigate” families let alone tell courts whether or not to destroy them forever. 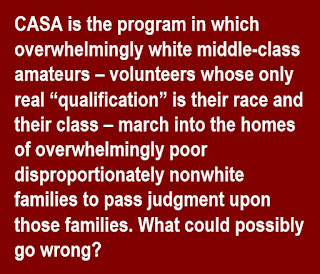 The new report is particularly important because the Florida program has sunk lower even than most other CASA programs in trying to justify its existence through a fear and smear campaign not only against families but against better alternatives.

The new report from the Florida Legislature’s Office of Program Policy Analysis and Government Accountability (OPPAGA) is so damning in so many ways that there’s a risk of losing the forest for the trees.  Prof. Robert Latham, associate director of the University of Miami School of Law Children and Youth Law Clinic, has a detailed analysis of both on his excellent Florida child welfare blog.

The best view of the forest comes from the report’s survey of judges and lawyers.  The judges were generally fine with the program.  The lawyers, not so much.

According to the report:

[D]ependency attorneys expressed several concerns with the program. Concerns included …  GALs [remember, in Florida CASAs are called GALs] often reiterating [Department of Children and Families] recommendations; and lack of volunteer expertise.  Some also stated the program seems biased against and often delays reunification.  Attorneys and one judge expressed concern that volunteers’ personal experiences and biases may lead them to confound the safety of the parents’ home with what they think is a better home environment with a foster parent, resulting in more frequent recommendations for termination of parental rights. 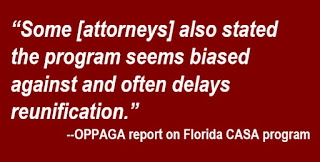 Many of these attorneys also reported issues with  GAL efficiency, including …
irrelevant court filings by the  GAL  (such as requests for parent to undergo a psychological evaluation when there is no history of mental health issues)…

Some attorneys would like more training on family reunification as the primary goal in dependency.  This could include increased awareness of the benefits of preserving the family,  consequences of terminating parental rights,   realities of foster care,   and difficulties faced by disadvantaged parents. Six of the attorneys also reported that volunteers need more training on what actions or options are legal within the dependency system.

Notwithstanding its genteel, measured language, the OPPAGA report confirms once again what an increasing body of research has found - that, in the words of a comprehensive law review article, CASA is “an exercise of white supremacy.”

The research shows that, compared to children not burdened with a CASA on the case, foster children with CASAs were:

● Less likely to be reunified with their own parents.

● Less likely to find permanence in the form of guardianship by a relative.

● More likely to “age out” of foster care with no home at all.

More “training” won’t fix it; the bias is baked in.

As for representing children in court – CASAs don’t actually do that. A CASA’s mandate is to tell the court what the CASA thinks is “best” for the child. If the child disagrees, the child is effectively silenced.

A far better approach is for the child to have a lawyer who advocates for what the child wants – not because that’s always best, but because the only way a judge can make a truly informed decision about what is best is if all parties have strong advocates making the case for their clients’ desired outcome.

As for children who are too young to express a rational preference – or even too young to speak (a prime focus of the Florida program’s fearmongering) -- there’s actually a better option than CASAs for them, too, as is explained in this excellent article from Family Law Quarterly.

This kind of representation has another advantage: It qualifies for 50 percent federal reimbursement for every eligible case (the formula is complicated, but on average somewhere between 40 and 50 percent of cases probably would be eligible).

The study found that, even after pouring $600 million in taxpayer funds into the program over 15 years, using the criteria the program itself uses to claim success, there actually is no evidence that the program does any good – and some limited evidence that it might be doing harm. … [Prof. Latham] is not a CASA-basher. On the contrary, he worked in the Florida GAL program, began his excellent blog with posts defending that program and, as recently as 2016, received the program’s Excellence in Advocacy award.

But what started him wondering about the program’s effectiveness was the depths to which it has sunk to try to keep itself in business and prevent the establishment of a better way to represent children.  The “better way” part is my conclusion. Prof. Latham sees room for both.

You can read all about that earlier study, and the ugly tactics the Florida CASA program uses to try to justify its existence in that 2019 post.  I particularly hope people will read about those tactics because, I suspect, they will be on display Monday when the director of the Florida CASA program, Alan Abramowitz, testifies before a legislative committee.

He’ll be testifying about the OPPAGA report.  At the start of this post, I discussed the most important part – what the lawyers who actually have to work with the CASA amateurs found.  But there is more.

Let’s start with the good news: 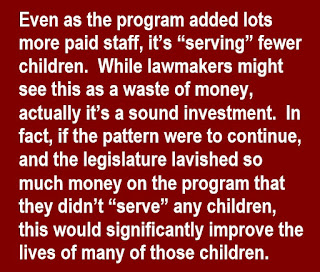 Even as the program added lots more paid staff, it’s “serving” fewer children.  While lawmakers might see this as a waste of money, actually it’s a sound investment.  In fact, if the pattern were to continue, and the legislature lavished so much money on the program that they didn’t “serve” any children, this would significantly improve the lives of many of those children.

The worst news is “the forest” – the confirmation of the profound bias against families.  But there’s also bad news about the trees:

● The report spends a lot of time on the data the CASA program uses to justify its existence.  Prof. Latham discusses this in great detail so I’ll just boil it down: Florida CASA doesn’t have a clue about what Florida CASA does or does not accomplish.

● What we do know, however, is that there is enormous variation within Florida concerning outcomes for children – a further indication of CASA bias.  While the data are so poor one can’t be certain, it appears that in one region, for example, 51 percent of cases with a CASA ended with reunification while in two other regions it was only 37 percent.  Nearly half of all cases in one region ended with children’s rights to their parents terminated and the children adopted; in another region it was 19 percent.

In fact, the Florida CASA program seems to be so wrapped up in playing God that it even opposed legislation to create a foster children’s bill of rights – and they were very basic rights.  The program’s attitude seems to be: We decide if you have rights, we decide where you will live, we decide if you will ever live with your family again. Because only we know what’s “best.”

Of course, not every Florida CASA behaves that way. Consider one of the many heartbreaking cases documented by USA Today Network reporters involving children needlessly torn from parents whose only crime was to be, themselves, victims of domestic violence. In one such case, the CASA, Brooke Robertson, fought hard to keep the family of Marion Phillips together for as long as she could.  According to the story:

The case still haunts Robertson, who grew up poor herself and said Marion’s five-year struggle highlights an uncomfortable truth for child welfare workers: Often, their job is weighing whether to take a child from a loving but flawed family and put them in the arms of wealthy strangers.

“Yes, they would have sushi and hummus and trips to the museum, instead of Mountain Dew and wrestling matches,” Robertson said. But she couldn't help but wonder what would have happened if the state had given a fraction of the stipend they pay to foster parents – more than $400 per child per month – to Marion.

Robertson imagined Marion with a fine apartment, a safe neighborhood, professional babysitters, after-school tutors, a car with room for the kids, a private attorney.

But that kind of CASA doesn’t seem to be welcome in Florida. After she was off the case, she looked up the case in a child welfare database.

For that, USA Today reports, she was forced to resign.

Posted by National Coalition for Child Protection Reform at 10:14 PM