Exploiting tragedy to tear apart families: Did LePage learn from Trump or was it the other way around?


● Maine Governor’s child welfare proposals represent the triumph of fear and ignorance over proven success.  They will make all of Maine’s children less safe.

● The Maine Legislature, children’s last line of defense against these dangerous bills, is scheduled to hold a hearing on them today.

An email roundup of media news and commentary from Columbia Journalism Review last week highlighted how Donald Trump has exploited the death of Mollie Tibbetts, allegedly killed by an undocumented worker, to push his agenda of fear and hatred toward immigrants.  As CJR noted, the White House rushed out a video featuring relatives of people killed by undocumented workers – and, of course, Fox News was glad to amplify the message.

All of it was in support of the Big Lie of American immigration. Or, as CJR explained:

The president’s hardline immigration stance is grounded in the false belief that undocumented immigrants represent a clear and present danger to American citizens, and Tibbetts’s murder fits the narrative that has been a hallmark of Trump’s rhetoric since the first moments of his campaign.

(CJR should have said false claim – we don’t know if even Trump really believes it.) 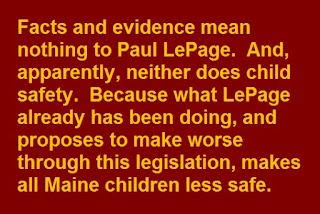 At almost exactly the same time, in Maine, Gov. Paul LePage -- often referred to as Trump-before- lying, racism, vulgarity and miscellaneous cruelty -- was announcing a series of measures to finish the job of undoing one of the nation’s most successful child welfare reforms.
Trump because of his similar penchant for

What the LePage Bills would do


Not everything in LePage’s plan is wrong.  He’s right to propose a pay raise for caseworkers and he wants to improve information technology.

But the major change proposed by LePage involves changing a single paragraph in state law.  It’s in the part where the legislature explains its intent. This section of law already accepts – in its very first paragraph – the false premise that family preservation and child safety are at odds.  LePage proposes to deemphasize helping families even further.

Other proposals encourage a massive increase in the reporting of false allegations and trivial cases, further overloading caseworkers.

So on balance, this package of bills represents the triumph of fear and ignorance over proven success.  It will make all of Maine’s children less safe.

No system can prevent every child abuse tragedy. But Maine spent years transforming its system from a national disgrace into a national model – according to no less than Harvard’s Kennedy School of Government, which made the state’s reforms a finalist for its Innovations in American Government Awards. 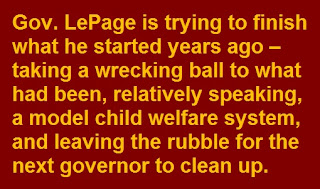 Now, Gov. LePage is trying to finish what he started years ago – taking a wrecking ball to what had been, relatively speaking, a model child welfare system, and leaving the rubble for the next governor to clean up.

Indeed, even the tragedies now in the news did not occur during the administration of former Gov. John Baldacci when the reforms were in effect. They occurred after the LePage Administration already had begun dismantling those reforms.

Gov. LePage is proposing to do to children in Maine what his idol, Donald Trump, did to children at the Mexican border – tear them needlessly from their families and wreak havoc on their psyches, or worse. And if anyone says “but this is different, we’re doing it to keep children safe” – remember, Trump said everything he did was in the name of safety. (See examples here  and here.  In fact, the LePage administration already is doing it, forcing children to spend their days in offices and their nights in hotels.

Here’s how some of the governor’s bills make all children less safe:

● They doom far more children to be consigned to the chaos of foster care.  Most cases are nothing like the horror stories.  Far more common are cases in which family poverty is confused with “neglect.”  That’s why study after study after study has found that, in typical cases, children left in their own homes fare better even than comparably maltreated children placed in foster care.

● They doom far more children to endure abuse in foster care itself.  Most foster parents do the best they can for the children in their care.  But the rate of abuse in foster care is far higher than generally realized and far higher than states admit in their own statistics – which involve states, in effect, investigating themselves.  Multiple independent studies have found abuse in one-quarter to one-third of foster homes.  The rate of abuse in group homes and institutions is even worse.

The more that foster care systems are overloaded with children who don’t need to be there – as is happening already in Maine and will worsen if these bills become law – the greater the temptation to lower standards for foster parents and ignore warnings about abuse in foster care.

Forgetting the lessons of Logan Marr

If there is one state that should have learned that lesson it’s Maine – after the tragic death of Logan Marr.  And, of course Maine did learn the lesson – and crafted a child welfare system that dramatically curbed needless removal of children, with no compromise of safety.  During the Baldacci administration, the Maine system was among the best evidence in America that you can’t have child safety without family preservation. 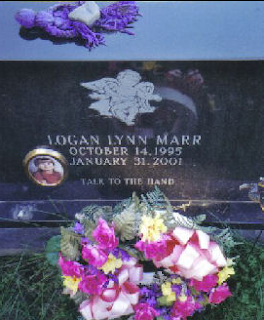 In what is perhaps an all-to-fitting legacy, what Paul LePage is doing now is like spitting on Logan Marr’s grave.

Facts and evidence mean nothing to Paul LePage.  And, apparently, neither does child safety.  Because what LePage already has been doing, and proposes to make worse through this legislation, makes all Maine children less safe.

That’s because the real reasons for deaths of children “known to the system” almost always involve overwhelmed workers missing warning signs because they have no time to investigate any case properly.  For years, LePage has been overwhelming them even more.

And it’s not just the bill demanding that Maine further deemphasize helping families that endangers children.

● Add to it his bill criminalizing the failure of mandated reporters to report anything and everything. That means a lot of scared doctors and teachers, among others, will be calling in all sorts of cases they know are nonsense - because they’ll be afraid to do anything else. So caseworkers will be wasting even more time spinning their wheels. They’ll have even less time to make sound decisions – and even less time to find children in real danger.  And, by the way, there is no evidence that mandatory reporting itself improves child safety; and many one-time supporters of the practice have had second thoughts. [UPDATE, AUGUST 18: This bill was defeated in committee.] 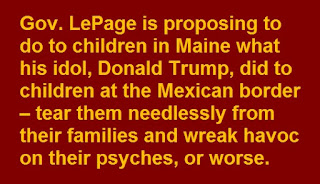 ● Now add his bill requiring DHHS to keep and use reports that don’t even meet the extremely low standard for “substantiation” under Maine law.  (Substantiation doesn’t mean a court made a decision after hearing all sides. It Maine as in most states it means only that a caseworker concluded there was slightly more evidence than not that some sort of abuse or neglect occurred. Unfounded reports do not even meet that standard.)

The state’s press release says “keeping these records allows the department to determine whether the family has exhibited a certain history or pattern of behavior.” But it is far more likely to reveal only a “pattern” of being victimized by false reports.  The proposed law is an invitation to anyone with a grudge against a former friend, a neighbor or an ex-spouse: Just keep calling in false reports and eventually it will stick.

By definition, children are defenseless.  Right now the Maine Legislature is their last line of defense against proposed laws that will make all of them less safe.