For once a happy anniversary: The story about the study that (probably) changed child welfare is ten years old

NCCPR’s full analysis of the studies discussed in this post, and links to the studies themselves, are available here 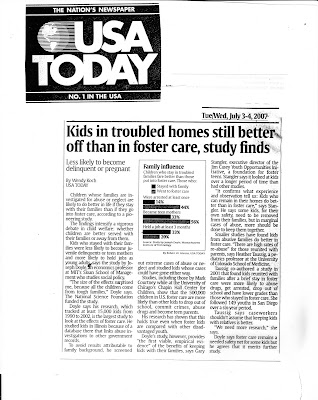 The story reported on the pioneering work of MIT Prof. Joseph J. Doyle; specifically the first of his massive studies comparing the outcomes for children placed in foster care to children left in their own homes.  The study looked at precisely the cases where the child welfare debate is most important – the “in-between” cases, where a decision could go either way.

As USA Today explained the results:

Children whose families are investigated for abuse or neglect are likely to do better in life if they stay with their families than if they go into foster care, according to a pioneering study. …

Kids who stayed with their families were less likely to become juvenile delinquents or teen mothers and more likely to hold jobs as young adults, says the study by Joseph Doyle, an economics professor at MIT's Sloan School of Management who studies social policy.

"The size of the effects surprised me, because all the children come from tough families," Doyle says. The National Science Foundation funded the study.

There was, in fact, a wealth of earlier research suggesting similar results, including a study the year before using different methodology but coming to remarkably similar conclusions. But the Doyle study stood out for its size, its scope, its rigor and its clear findings.

One year later, Prof. Doyle published another study, with an even larger sample.  The results: Once again, children left in their own homes did better.

How did child welfare respond?

The take-the-child-and-run extremists have spent the past ten years pretending the studies don’t exist.  But there are many people of good will in child welfare, and some of them are willing to reconsider old assumptions in the face of new research.

The year 2007 saw the first significant decline in entries into foster care in decades (there was a very small decline the year before). While I can’t prove that Prof. Doyle’s study contributed to that, I suspect that it played an important role. The decline continued until 2013 – I will discuss why it stopped, and the myths about why it stopped, in a post to this Blog on Monday.

So thank you Prof. Doyle, for helping to spare thousands of children from the traumas you describe in your work. And thank you Wendy Koch - the former USA Today reporter who made that study front page news.
Posted by National Coalition for Child Protection Reform at 6:45 PM