Montana is a perennial candidate for child removal capital of America. The state family police agency wants to keep it that way. That's why it's fighting an excellent bill.

UPDATE, JAN. 25:  The Montana House of representatives Judiciary Committee passed the bill nearly unanimously.
Year after year, Montana tears apart families at the highest or second highest rate in America, even when rates of child poverty are factored in.  Just over a year ago, a performance audit by the Montana Legislature’s Audit Division confirmed that the all-purpose excuse for this offered up by the state’s family policing agency, the Child and Family Services Division (CFSD) – drugs -- was, to put it kindly, nonsense.

But now, Montana has a chance to move to the forefront of doing child welfare right.

The chance comes in the form of a bipartisan bill, HB-37.  The bill would:

● Require that impoverished parents be given a lawyer (in Montana that’s now discretionary). High-quality legal representation has been shown to significantly reduce foster care with no compromise of safety.  This provision is an important first step.

● Require that CFSD get a warrant before putting children at risk of the enormous trauma of needless foster care. Such warrants can be obtained by phone or electronically and there are exceptions for genuine emergencies.

Last week, the Montana House of Representatives Judiciary Committee held a public hearing on HB-37.  NCCPR testified via Zoom.  We also provided an in-depth written analysis of the bill and the underlying issues.

But in this post, I’m going to focus on some of what happened at the hearing. 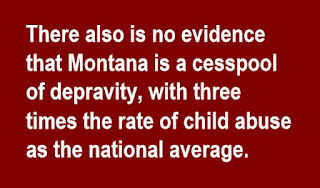 During NCCPR’s testimony I predicted that sooner or later someone would invoke the Big Lie of American child welfare – that child removal supposedly equals child safety and child safety and family preservation are opposites that need to be “balanced.”

And sure enough, one opponent of the bill did just that, telling the committee the issue is:

“trying to balance the protection of children and … avoiding needless investigation, removals and the associated harm."

That suggests that the more needless investigation and removals, the more that children are “protected.”  If that’s true, then Montana children must be safest from abuse (or second safest from abuse) in America!  There is, of course, no evidence for this.  In contrast there is plenty of evidence that needless removal does enormous harm to the children needlessly taken, puts them at high risk for abuse in foster care, and so overloads the system that workers have less time to find the relatively few children in real danger.  In short, Montana’s take-the-child-and-run approach makes all children less safe.

There also is no evidence that Montana is a cesspool of depravity, with three times the rate of child abuse as the national average.  But apparently CFSD does not agree.  Because a CFSD official said:

“Child and Family Services only removes children when it is unsafe and it is urgent and there are no other options to prevent removal.”

So either Montana really is the child abuse capital of America – or CFSD is mistaken. 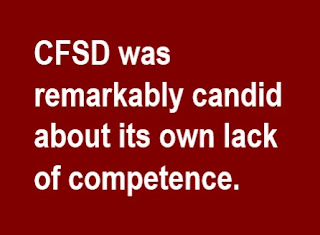 And suppose this hearing had taken place a few years ago. Do you think CFSD would have said: Yes, you’re right!  Our rate of removal is outrageously high and unnecessary!  Or would the agency have repeated the same boilerplate it offered up last week?

● CFSD was remarkably candid about its own lack of competence.  As noted earlier, the warrant provision in the bill would not require running down to the courthouse for a hearing.  In fact, it wouldn’t require a hearing at all.  All it would take is a phone call or an email explaining to the judge why the caseworker believed removal was the only option.   And again, this would not apply in actual emergencies – just as, if police want to search the home of someone they suspect is a child murderer, they must get a warrant – except in emergencies.

CFSD’s response: Oh, but that would be soooooo hard, and soooooo onerous and sure, other states have done it, but they had to create a special form!

There was similar whining about a provision that would require that, after CFSD drags a child away from everyone s/he knows and loves, there has to be a hearing within 72 hours.  Right now, in Montana, it can be anywhere from five to eight days.  For an adult that may not be much, but for a small child it’s an eternity.  But even though other states do it in less time, CFSD insisted that meeting even a 72-hour time frame would be just too difficult for them to manage.

● Did the judges attending the hearing notice how CFSD insulted them?  During the debate on warrants, someone from CFSD said something like: Why bother!  As soon as there’s a hearing the judges always rubber-stamp our decision to remove the child anyway!  (CFSD didn’t use the term rubber-stamp, of course, but that was the message.) 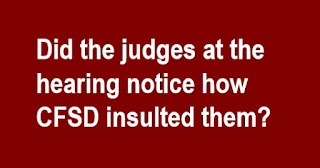 Unfortunately, judges probably do rubber-stamp CFSD far too often.   But that’s often because, especially at that first hearing, they’re getting only one side of the story.  The family typically either doesn’t have a lawyer at all, or has one they may have met five minutes before the hearing.  But another provision of HB-37 would start Montana toward changing this,  by requiring lawyers for all indigent parents going up against CFSD.  (Montana is one of the few states that doesn’t require this now.)

But during the hearing one judge put CFSD on notice: The standard  boilerplate used by CFSD which boils down to little more than: “We took your child because we felt like it” is not enough to get a warrant.

Posted by National Coalition for Child Protection Reform at 11:39 PM