A Blueprint for Child Safety 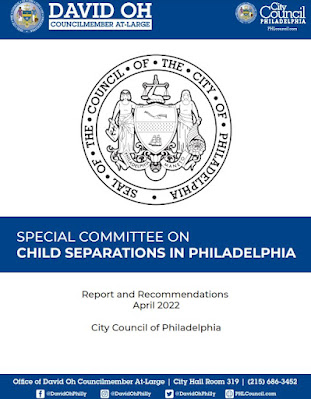 I am proud to serve on a special committee of the Philadelphia City Council examining the child welfare system in that city.  We released our report today.  Here is my statement.

I regret that, because I am over 65, and because Amtrak has failed to show the same wisdom as the City of Philadelphia concerning masks and indoor spaces, I can’t be with you in person today.

At the first virtual meeting of our committee I said this:

Philadelphia has been leading the nation since before it was a nation. There is no shortage of talent or creativity. So my hope is that we frame recommendations that won’t just make Philadelphia no worse than other cities, but will allow Philadelphia to leap ahead and become a model of what child welfare can be.  I want there to come a time when people from all over America say: We need to do it the Philadelphia way.

Today, we release a report filled with concrete recommendations to help achieve that goal.

But to get these reforms, one thing above all else must happen.

Our policymakers must no longer be suckered by the Big Lie of American child welfare: the false claim that massive intrusion on families and all the terrible suffering that inflicts upon them is somehow necessary to keep children safe.

To those to make that claim I have one simple question? Did it work?

Back when Philadelphia was tearing apart families at the highest rate among America’s biggest cities, did child abuse disappear? Did children “known to the system” stop dying?

The people who want to sucker you into thinking that we need massive intrusion into families are the people who built and maintain a system that has done just that for decades, and it has failed.

Nationwide, the system they built inflicts emotional trauma on one-third of all children, and more than half of all Black children, through needless investigations.

The system they built exposes children to the high risk of abuse in foster care itself.

And the system they built so overloads frontline workers that they can’t investigate any case properly.

The system they built, in the name of child safety, has made all of Philadelphia’s vulnerable children less safe.

So why in the world should we keep listening to them?

In closing, there are some people I’d like to thank.  First Councilmembers Bass and Oh, for their leadership in bringing this issue to the forefront and demanding action.  I’d like to thank Tyler DeBusi for his tireless staff work, and my fellow committee members for their abiding concern for Philadelphia’s most vulnerable children, both on the committee and in their day jobs.

I want to thank the family defenders at groups like Community Legal Services and the Medical Legal Partnership at Penn – their model of high-quality family defense should be available to every family.

There’s another group I want to thank.  Frontline DHS caseworkers and their union.  Overwhelmingly, they want what we want – safe children and strong families. Sometimes we disagree profoundly on how to get there, but nothing in this report should be taken as a condemnation of their dedication and their concern as they do some of the hardest jobs imaginable.

Even if none of these recommendations is adopted, I think this committee has had a positive effect.  It is one of the reasons DHS has changed for the better.  There still is a long, long way to go. Philadelphia no longer is worst, though it still tears apart families at a far higher rate than many other cities.  But DHS deserves credit for beginning to make crucial changes.

That brings me to whom I want to thank most: The families.

The movement to change this system has been building for nearly two decades, starting with the work of DHS-Give Us Back Our Children.  But I believe a key turning point was the two days of City Council hearings that led to this committee’s creation.  The hearing was only supposed to go a few hours.

But families rose up almost as one to defend their children against the harm inflicted on them by DHS.  One after another after another they told their stories; it took two days to hear them all.  The City Council listened.  That put pressure on DHS, and the creation of the committee keeps the pressure on.

I hope DHS will embrace these recommendations and use them to accelerate progress.

Read the story about the report in Billy Penn.

Read the story in the York Daily Record

Posted by National Coalition for Child Protection Reform at 4:00 PM