There are many reasons five-year-old Logan Marr died in 2001.  The most important is that she was placed with a foster mother – and former caseworker for the state “child welfare” agency – who tied her to a highchair in the basement with 42 feet of duct tape.  Logan died from asphyxiation.

Another reason is that Maine, like every other state, routinely confuses poverty with neglect.  I suggest that anyone who wants to see how that played out for Logan Marr watch the PBS Frontline documentary The Taking of Logan Marr.

But there was another reason: Maine’s embrace of the Big Lie of American child welfare.  You know the one: Sure a child might be emotionally harmed if we tear her from everyone we know and love, but at least she’ll be safe.  It’s the lie that says family preservation and child safety are opposites that need to be “balanced.”  It’s the lie that says if you do less to keep families together children are safer, and vice versa.

It is the lie that contributed to the death of Logan Marr.

Given how this myth contributed to Logan’s death, one would hope Maine would be the last state where a body charged with doing independent research for the Legislature would be suckered by it.  Unfortunately, Maine’s equivalent of the federal Government Accountability Office, the Office of Program Evaluation and Government Accountability (OPEGA) did indeed fall for it in a report released last week.

An entire section of the report called “Child Welfare Philosophy and the Pendulum Swing” is devoted to making the false claim that:

Shifts in child welfare policy and practice over time have often been described as a “pendulum swing” … between a priority on family preservation (preventing the removal of children and increasing reunification) and a priority on protecting child safety (even if that indicates removal of a child from the family).

This framing appears at least seven times in the report.  OPEGA was so committed to it that when they surveyed “stakeholders” they stacked the deck when posing this question:

Survey respondents who disagreed that the balance is appropriate had the opportunity to provide comments. In these comments we observed that CPS staff who disagreed more often indicated that child safety is too heavily weighted over family preservation, while the mandated reporters more often indicated that family preservation is too heavily weighted relative to child safety.

For OPEGA, the possibility that family preservation increases child safety was not even on the table. 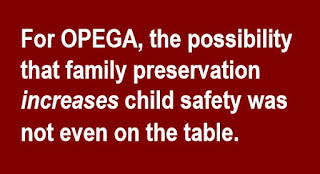 At one point the report does say the two are not mutually exclusive – but only in the sense that there are  laws mentioning both.  The idea that they are opposites that need to be balanced is never questioned – so the false framing that contributed to the death of Logan Marr is reinforced.

OPEGA also gives an incomplete list of the reasons why people hold contrasting views. According to the report:

These beliefs and opinions are shaped by individual experiences, perspectives, risk tolerance, and their role in the system.

But one factor is left out: Those of us who support family preservation – because it’s safer for children – base it on research: The studies showing that, because typical cases are nothing like the horror stories, in such cases children left in their own homes typically do better even than comparably-maltreated children placed in foster care, and the studies showing the high rate of abuse in foster care itself. (See above for the links.)

In a story about the report, Portland Press-Herald reporter Randy Billings shows he understands the real debate.  Ironically, his excellent framing gives OPEGA more credit than it deserves.  He writes:

There also is a lack of consensus about whether it is more important to emphasize child safety through removal from a family or through family preservation, the report says.

In discussing the response to high-profile child abuse fatalities at the end of 2017 and the beginning of 2018, OPEGA acknowledges that staff at the state family policing agency, the Office of Child and Family Services, said they were “working from a place of fear…” But the report underestimates the impact of that fear, looking only at increases in reports and investigations and not mentioning the huge increase in children torn from their homes.  As the state data tables available here show, in Maine entries into foster care skyrocketed more than 50% between 2017 and 2019.

Using the same limited measures, OPEGA suggests that child abuse deaths in June 2021 didn’t have much effect, since investigations didn’t increase.  There are three problems with this:

● It may be too soon to feel the full effects.

● There are no figures at all on entries into care – so we don’t know if they went up again.

● Most important: By 2019, Maine was tearing apart families at a record rate – the fanaticism for child removal was worse even than before Logan Marr died.  So when you’re at your very worst, saying: “Hey look, maybe it didn’t get worse still!” isn’t reassuring.

Caseworkers themselves understand.  Everyone agrees a key problem is that the workers are overloaded.  But, as the report itself acknowledges:

In surveys and interviews, some OCFS supervisors and caseworkers indicated that valuable time is spent investigating reports that – in their opinion – did not appear to warrant an investigation. … With a fixed number of caseworkers, if fewer reports are screened in as appropriate for investigation, caseworkers would, in theory, have more time available for each investigation and, in turn, the opportunity to complete a more thorough assessment of risk and safety concerns.

Note the skepticism from OPEGA “in theory” “—in their opinion—”

In contrast, no such skepticism is expressed for the more commonly suggested alternative: Hire a bunch of additional caseworkers.  But that has failed repeatedly. Hiring binges during foster-care panics are likely to lead to even further widening of the net of needless intervention into families. All the new caseworkers -- “working from a place of fear…” -- chase all the new cases and all you get is the same lousy system only bigger.

The funds that would be squandered on a caseworker hiring binge would be far better spent bolstering services for families which, the report admits, range from grossly inadequate to nonexistent.

While perhaps not as damaging, another section of the report may be even more offensive: It confuses myths and facts because it confuses what’s on paper with actual practice.  The result is the Disney version of how a family policing agency works.  Indeed, this section reads as if it was written by the PR department of the predecessor of OCFS, the Department of Human Services at the time Logan Marr died.  What OPEGA accepts without question now is what DHS claimed then as it sought to defend itself. 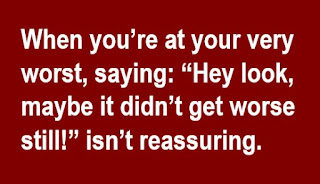 Thus, OPEGA claims it’s a “misconception” that “OCFS decides on its own whether a child is removed from their home.”  They regurgitate the party line you always hear from agencies like OCFS: “A judge has to approve everything we do.”  But in the real world, not Disney World, OCFS does indeed decide on its own.

For starters, OPEGA repeatedly claims that caseworkers must get a so-called “preliminary protection order” (PPO) signed by a judge before removing a child.  But on page 24 of the report, OPEGA admits that’s not always true.  According to the report:

If a child is determined to be unsafe and time is needed to write and file the petition, the caseworker may collaborate with law enforcement by asking them to invoke a six-hour hold in which law enforcement takes temporary custody of the child.

In addition, Maine law states that

But more important, the requirement for a court order is meaningless.  There is no real hearing beforehand, no chance for a family to defend itself.  A caseworker simply marches into court (or, after hours, calls the judge) and says: “I think we need to take this child right now, here’s why.”  Do you seriously think a judge is going to say no?

OPEGA could have checked.  They could have obtained records and determined how often a PPO request is rejected.  But, apparently, they didn’t.

Also labeled by OPEGA as a misconception: “CPS caseworkers have authority to enter a home and compel parents to cooperate with an investigation.”

But that depends on what you mean by “authority.”  They may not have the authority on paper, but in the real world if you refuse that in itself makes you suspect, so the worker can threaten to call a judge and get authorization to not only enter the home but walk out with your children.

And in one case OPEGA is wrong even about the Disney version.  The report claims that parents have the right to refuse to let their children be interviewed.  But elsewhere the report specifies that the workers can go to, say, a child’s school and interview the child without the parent knowing.  (There are times when such action is justified, my point here is only that OPEGA is wrong to suggest this option doesn’t exist.)

And, of course, if you don’t know about a right, you don’t have that right.  The report includes this curious statement:

Over the course of the review, we heard that there is growing awareness among families that engagement with CPS is voluntary, and more families are declining to allow access to their homes by DHHS. [Emphasis added.]

That doesn’t sound like caseworkers are actually telling families their rights when they knock on the door.

Also labeled a “misconception”: “Caseworkers alone make child safety decisions.”  In fact, the report explains, they have to get a supervisor to sign off on them – so there may be all of two people involved - and sometimes they consult with others, too.  But the report does not say how often the supervisor actually overrules the caseworker – and whether that is more likely to happen when a worker wants to remove a child or leave the child in the home.

The OPEGA report also notes that workers use a series of checklists known as “Structured Decision Making.” The report does not mention that there have been serious questions raised about racial bias in the SDM process.

And finally, we should note what the report says about Logan Marr, and about how Maine was briefly a national model when, in the aftermath of her death, it rejected the Big Lie and embraced safe, proven alternatives to foster care.

What does the report say about that?  It says nothing.

As far as OPEGA is concerned it’s as if Logan Marr never existed.  Unfortunately, that seems to be the prevailing view in Maine right now.  And that, of course, makes the next such tragedy even more likely.

Posted by National Coalition for Child Protection Reform at 4:58 PM