The numbers are - literally - unreal! Chapin Hall adds a “warning label” to a bad graphic about child abuse – but it’s still misleading

About a month ago, I wrote a column for The Imprint calling out several organizations for using a grossly misleading graphic that exaggerates the rate of physical and sexual child abuse.  In fact, two-thirds of the numbers in the graphic are, literally, made up.  The creators of the graphic, from the University of New Hampshire, decided to give the actual rate of known neglect, but double the rate of physical abuse and triple the rate of sexual abuse.

As I explained in The Imprint:

The end result is a graphic that leaves the impression that there once was just as much physical and sexual abuse as there was neglect — and all three existed in massive proportions — until the child welfare system got the abuse figures to plummet.

The creators of the graphic include a disclaimer – but only in the fine print, where many who see the original shocking visual are unlikely to notice.  The Chapin Hall Center for Children reproduced the graphic in a presentation earlier this year.  Then Chapin Hall’s Executive Director, Bryan Samuels, compounded the error by extrapolating from the numbers in ways not backed up by the figures themselves.

See for yourself.  Here is the graphic with the made-up numbers, as presented initially by Chapin Hall: 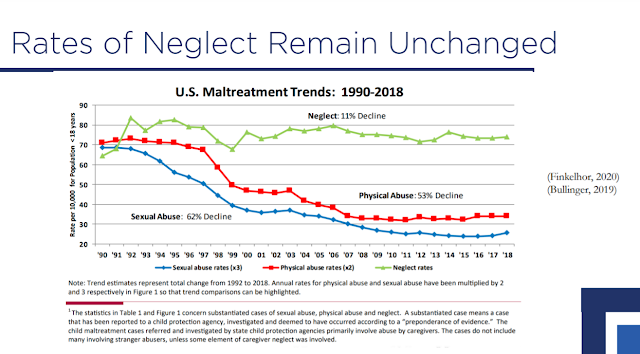 Here are the real numbers (Bonus, this version is interactive!):

Last week at a virtual conference sponsored by the Kempe Center, Chapin Hall was back.  To their credit they slapped a great big warning label on the graphic: 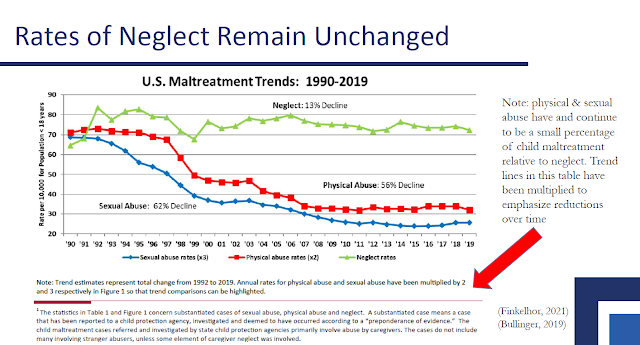 But why use made-up numbers at all?  Why are so many in the child welfare establishment afraid not to exaggerate?

And we shouldn’t forget the worst offender: Prevent Child Abuse America.  When they used the graphic at least year’s Kempe conference, they reproduced the original but actually eliminated almost all of the fine print – so it would be extremely difficult for anyone to see that the physical and sexual abuse numbers are not real.  (If you read our earlier post on this blog about “health terrorism,” that probably comes as no surprise.)

Meanwhile, another panel at this year’s Kempe conference used the same most-misleading-of-all version as PCAA.

It is the Graphic That Will Not Die.  Perhaps that’s because, for the child welfare establishment, made-up numbers have always told a better story than real ones.

Posted by National Coalition for Child Protection Reform at 2:41 AM