Even CPS agencies should be extremely wary of intruding on families based on such allegations.  There’s no excuse for sending in the cops.

In Los Angeles County, the Department of Children and Family Services and various law enforcement agencies have an agreement: What are thought to be more serious cases alleging child abuse, in particular those alleging violation of criminal law, are automatically referred to law enforcement.  In some of those cases they must do their own investigation, in other cases it’s discretionary.  In all cases, these investigations are in addition to – not instead of – investigations by DCFS.

Last October, based on the best information available at the time, the Chronicle of Social Change reported that in the City of Los Angeles, from January 2018 to July 2019, the police department had not investigated 4,000 such cases - 11 percent of the total.  In contrast, the Los Angeles County Sheriff’s office investigated all but three percent of these cases.

So the LAPD did an audit.  In a follow up story, the Chronicle reports:

The LAPD is right. The other agencies are wrong. 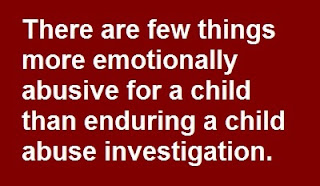 The reason for that should be obvious. There are few things more emotionally abusive for a child than enduring a child abuse investigation.  Imagine for a moment being a small child. Suddenly strangers come to your home – or you’re taken from your classroom to a school office.  You are questioned intently about the most intimate aspects of your life. If you’re old enough – and poor enough –you know that if that interrogator is from DCFS there is a risk you won’t be going home. (You know this because it happens so often in poor communities that everyone in those communities knows it).

In calling for much narrower legal definitions of child maltreatment, three of the nation’s leading scholars of child welfare in the 20th Century, Anna Freud, Joseph Goldstein and Albert J. Solnit wrote that children

react even to temporary infringement of parental autonomy with anxiety, diminishing trust, loosening of emotional ties, or an increasing tendency to be out of control.  The younger the child and the greater his own helplessness and dependence, the stronger is his need to experience his parents as his lawgivers --  safe, reliable, all-powerful and independent.

No matter how sensitively it’s handled, it’s a trauma. And there’s no guarantee it’s going to be sensitive.  Consider this example, cited by Prof. Vivek Sankaran in a recent column for the Chronicle:

“Your father is as worthless as your mother.”  Those words – said by a caseworker to a 13-year-old child whose parents were addicted to heroin – jumped out at me as I read the case file. My heart immediately sank.

Now, imagine the trauma if, say, the next day the same process is repeated all over again, but this time the interrogators are carrying guns.

Even when an allegation is so serious that law enforcement involvement is justified, there is considerable risk that their presence will contribute to traumatizing the child, as happened in this case, which went all the way to the U.S. Supreme Court.  There is no legitimate reason to put children at such risk over an allegation of “emotional abuse.”

In fact, unlike allegations of physical and sexual abuse, when the allegation is emotional abuse, Los Angeles County law enforcement agencies can use their discretion and decline to perform this second, redundant investigation.  As the Chronicle story notes, the 2015 agreement setting up this system urges police to investigate these reports.  The LAPD has wisely decided not to take that advice. They’ve decided to exercise their discretion and refuse to inflict that additional trauma. They deserve praise for that.

Why in the world would anyone even think of sending in the cops to investigate emotional abuse?

The Chronicle story cites two studies concluding that emotional abuse “can cause as much lasting damage as physical or sexual abuse.”  Well, yes.  That’s analogous to the argument used by those who dismiss child welfare’s widespread confusion of poverty with neglect. They say sometimes neglect can be as bad as abuse.  That’s because neglect is such a broad, vague category that it can encompass everything from deliberately starving a child to death to running out of food because the SNAP benefits didn’t last the full month.  But which is more likely?

Nor does it follow that the fact that emotional abuse might, in some rare cases, be as bad or worse than physical abuse, it requires the police to detect it.  LAPD’s decision does not mean no one investigates emotional abuse cases; DCFS still does.

The story then quotes Commander Carlos Marquez. He oversees the Special Victims Unit in the Sheriff’s Department, where they proudly investigate almost everything:

In other words, it’s a gateway allegation!

That’s always the excuse for the exercise of untrammeled state power over the lives of impoverished families. It’s the same reason poor mothers can lose their children for smoking marijuana when rich mothers can brag about it; the same reason schools can exploit "educational neglect" allegations to silence parents fighting for, say, a better special education plan. It’s also much like the excuse for stop-and-frisk – well, you never know when they might be hiding something!

There are several problems with this. First, reports that include emotional abuse as even one category of alleged maltreatment are relatively rare. In Los Angeles County 15 percent of reports include emotional abuse as the predominant allegation – there is no breakdown for when it is the only allegation, but it’s likely to be much smaller. So the chances are if there’s supposedly “something else” that something else already is in the allegation. 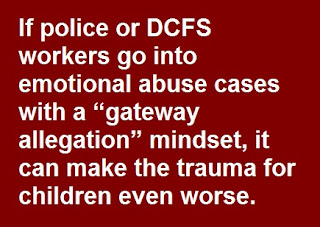 Indeed, if police or DCFS workers, go into emotional abuse cases with a “gateway allegation” mindset, it can make the trauma for children even worse.  After all, if you believe that the emotional abuse allegation is just the surface manifestation of, say, physical abuse, then it’s hard to resist a common practice across the country in physical abuse cases: Stripsearching the child looking for bruises.  If you think it’s hiding sexual abuse; well, the examination for that is even more traumatic.

The case for coercive intervention in emotional abuse cases is so weak that Goldstein Freud and Solnit (whom, it is widely conceded, “really [knew] something about child abuse”) argued that no one should investigate it at all – the risk of the state inflicting emotional abuse while seeking to detect it was simply too great.

The authors took particular aim at a model statute first drafted in the 1970s by an American Bar Association committee with the intent of narrowing the definition to reduce the likelihood of abuse by government authorities.  That definition allows coercive intervention

when a child suffers serious emotional damage, evidenced by severe anxiety, depression, or withdrawal or untoward aggressive behavior toward self or others, and the child’s parents are not willing to provide treatment for him/her.

Goldstein, Freud, and Solnit spend two pages explaining why this is still too broad.

I mention this because some of the language in question was adopted, word for word, by the California Legislature. But they made the statute even more of a fishing expedition by adding the catchall words “including but not limited to” the relatively narrow list in the model law. They also eliminated the part restricting intervention to cases where parents are not willing to provide treatment.  So now, in California, emotional abuse means whatever DCFS – or the Sherriff’s office – wants it to mean.

When I wrote my book about child welfare, Wounded Innocents, in 1990, I thought Goldstein, Freud, and Solnit had gone too far, and we should give wording along the lines of the ABA model statute a try.

Thank you, Commander Marquez, for showing me why I was wrong.
Posted by National Coalition for Child Protection Reform at 11:00 PM