Some doctors at a prestigious hospital in Wisconsin say they’re so afraid of false allegations from “child abuse pediatricians” that they fear taking their own children to their own hospital in a case of accidental injury.  And a new study shows how poor parents are driven away from help.

A mother walks into a government office in Rhode Island seeking public assistance benefits for her family.  The worker demands proof of residency.  But the family is living in their car. The mother doesn’t dare say so for fear that the worker will turn her in to child protective services.  So they lose whatever help might be available – and spend the winter sleeping in the car.

That anecdote is in one of two big recent stories documenting the terror we have unleashed as a result of “mandatory reporting” laws.  One story dealt with people who are among the most privileged in our society: white, affluent doctors.  The other, the one that includes the anecdote above, dealt with those who have the least: poor families.  Yet both illustrate the same tragedy. 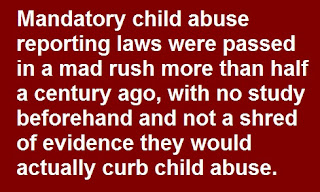 Mandatory child abuse reporting laws were passed in a mad rush more than half a century ago, with no study beforehand and not a shred of evidence they would actually curb child abuse. They require certain professionals to report any suspicion they may have of child abuse. Originally intended to cover only grievous cases of physical abuse, the scope of the laws expanded to include well, anything and everything.  So did the categories of professionals required to report. In some states everyone is a mandated reporter.

The states did it on their own in the late 1960s, largely at the urging of the medical profession.  Though many of the original proponents of these laws have had second thoughts, states that might want to reconsider will find it hard to turn back. That’s partly because, since 1974, a bad federal law supported by, among others, some journalists – has required states to maintain mandatory reporting. Yes, it’s in the Child Abuse Prevention and Treatment Act.

The devastation in poor communities 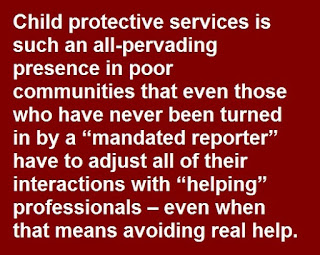 The way mandatory reporting harms entire poor communities is illustrated in this story from Rise, a magazine written by parents who have had to deal with child welfare systems. Rise interviewed Kelley Fong, a Ph.D candidate, in sociology and social policy at Harvard, about a study she did in which she interviewed more than 80 low-income mothers in Providence, R.I.

She found that child protective services is such an all-pervading presence in poor communities that even those who have never been turned in by a “mandated reporter” have to adjust all of their interactions with “helping” professionals – even when that means avoiding real help.As Fong told Rise:


We lean on schools and doctors and nonprofits to support families. The challenge is those services are in a position to turn moms in to CPS. To get help, you often need to open up about your challenges. Moms didn’t know if those admissions would lead to a CPS report. Given the high stakes, mothers would say: “It’s better safe than sorry — Even if there is a possibility I can get help I need, I don’t want to risk catching a case.”

One of the child abuse prevention initiatives widely regarded as most successful, voluntary home visiting for new mothers, has been compromised by our obsession with mandatory reporting. Again from the interview:

I heard from several moms that they were offered home visiting and they decided not to take it, not because they didn’t think it would help them, but because they worried about someone coming into their home. Will it lead to a CPS report if my home is messy? So these families who could have benefited from home visiting services didn’t end up receiving them. The goal of the child welfare system is to keep children safe; however, the way it is set up can generate responses that actually make children less safe.

The revolution is devouring its own

Mandatory reporting laws, considered revolutionary at the time, were pushed hardest by doctors.  But now, it seems, the revolution is devouring its own.

That is made clear by the ordeal endured by the children of two doctors at Children’s Wisconsin hospital, an ordeal inflicted by so-called “child abuse pediatricians” at their own institution.  Their story is the latest in a long line of such stories told by Mike Hixenbaugh of NBC News. 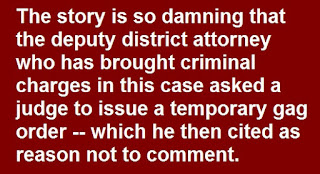 The story is so damning that the deputy district attorney who has brought criminal charges in  this case asked a judge to issue a temporary gag order -- which he then cited as reason not to comment.  It’s so damning that the Wisconsin Department of Children and Families “sent a reporter a cease and desist order warning of possible criminal charges for publishing information contained in a child abuse investigation file.”


So before continuing, remember, Wisconsin DCF and the D.A. absolutely DO NOT WANT YOU TO READ THIS STORY. Remember, they really, really don’t want you do read THIS STORY RIGHT HERE.  And one can only imagine how upset they’d be if you shared it.
Fifteen doctors ultimately attested to the fact that the child abuse pediatricians got it wrong. The injury to Dr. John Cox’s one-month-old adopted daughter was accidental.  But, Hixenbaugh writes, they found

a series of medical mistakes and misstatements by hospital staff members that has devastated Cox’s family and derailed his career. A nurse practitioner on the hospital’s child abuse team confused the baby’s birthmarks for bruises, according to seven dermatologists who have reviewed the case. A child abuse pediatrician misinterpreted a crucial blood test, four hematologists later said. Then, two weeks after the incident, armed with those disputed medical reports, Child Protective Services took the child.

Oh, and one other thing: One of the bruises that counted most heavily against the family actually was inflicted accidentally by hospital staff in the course of their child abuse investigation.

The entire ordeal began when Cox did the right thing and took his infant daughter to his own pediatrician at Children’s Wisconsin, Dr. Al Pomeranz.  Dr. Pomeranz didn’t actually believe Cox had abused the child – but as a mandated reporter, he felt he had to notify the “child advocacy team” at Children’s Wisconsin.

“In hindsight,” Cox said in a recent interview, “taking her to our own hospital was the single most harmful decision that we made for our baby.”

But even more damning than the behavior in this case is the extent to which the child abuse pediatricians at Children’s Wisconsin have cast a pall of fear over the entire institution. Writes Hixenbaugh:

Several emergency room doctors described an “out of control” child abuse team that is too quick to report minor injuries to authorities and that is too closely aligned with state child welfare investigators. Three of the doctors recalled being pressured by child abuse pediatricians to alter medical records, removing passages where they had initially reported having little or no concerns about abuse, though there’s no evidence that happened in Cox’s case.

Five doctors told a reporter they’re even afraid to bring their own children to their hospital after accidental injuries, fearing that a misdiagnosis or miscommunication might lead Child Protective Services to break their family apart. [Emphasis added.]

Birthplace of the “sentinel injury” theory

Part of the problem is that Children’s Wisconsin is the birthplace of the “sentinel injury” theory – the one that goes: there’s no such thing as a minor bruise – because it just might be a sign that the parent is about to beat, maim, torture, or murder the child.  It makes no sense if you think about it – which is why they’d rather we didn’t.

And if you think all this is so crazy that the Cox family must have been reunited - but you know better, right?  No. The child, now nine-months-old, is still in foster care. Wisconsin authorities are exploiting a technicality – the fact that the adoption has not been finalized – to deny her even visits with her parents. (So unfortunately, my guess is that even when the family finally is cleared, the child welfare authorities probably will try to prevent reunification by playing the bonding card.)  As for the “self-gagged” D.A. – he’s pursuing felony child abuse charges.

Cox and his wife, Dr. Sadie Dobrozsi, have two other adopted children, ages 5 and 3. And they are very scared.  Again, from that story Wisconsin authorities absolutely don’t want you to read:

“Will someone come to take me, too?” [the older boy] asks sometimes. At one point, he filled a backpack with his favorite toys and stashed it away in the closet — just in case.

As one doctor told Hixenbaugh:

“This is a disease in our hospital.  The way John’s case has been mishandled has opened all of our eyes to how big the problem is.”

UPDATE: In a follow-up story, Hixenbaugh reports that the hospital has now issued a memo to all staff. In that memo the hospital 1: totally defends the child abuse pediatricians. 2: Says in cases of any abuse allegation, the child abuse pediatricians know best. 3: Promises to "honestly and transparently" investigate the allegations in Hixenbaugh's original story.
Posted by National Coalition for Child Protection Reform at 11:00 PM

IF A LINK TO AN NCCPR DOCUMENT IS BROEKN ...