This case is the story of child welfare all over America, not just Connecticut 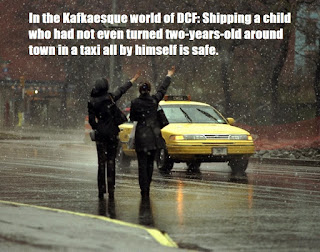 UPDATE, APRIL 20 2018: DCF got its revenge. A judge has terminated parental rights. Details in this story from The Day

This week, NCCPR released an in-depth analysis of a child welfare case in Connecticut that serves as a microcosm for the failings of child welfare all over America. In fact, child welfare systems in most states are worse.  You can read the full analysis here.

These are the key points:

● Profoundly embarrassed after they took away the children of Kirsten Fauquet only to have one child nearly die in foster care, the Connecticut child welfare agency is conducting what amounts to a vendetta against Fauquet and her partner John Stratzman.

● The extent of the vendetta can be seen in the fact that  DCF is seeking termination of parental rights against the recommendation of its own expert.

● As is so often the case when child welfare agencies take swings at parents, the blows are landing on the children.  DCF’s vendetta has compounded the trauma for the children.  They have been separated from siblings as well as their parents and moved from foster home to foster home.

● At the root of this case is the biggest problem in American child welfare: the confusion of poverty with neglect.  Yes, the parents made mistakes – but when you are poor, there is no margin for error.

● This is the kind of case that is far more typical than the stories of parents who beat and torture their children.  The only thing that makes this case unusual is the brutality inflicted on one of the children while in foster care.  (Abuse in some form is not unusual, however.  Multiple studies have found abuse in one-quarter to one-third of foster homes, and the record of group homes and institutions is even worse.)

What has been done to this family is done to tens of thousands of families every year. But it goes largely unnoticed.

● That’s partly because child welfare systems can hide almost everything they do behind confidentiality laws that protect agencies, not children.  This case illustrates the value of open court hearings in child welfare cases.

● But there’s another reason child welfare systems get away with hurting children this way:  Too many reporters are too willing to accept a child welfare agency’s version of events without asking tough questions.  This case illustrates how often, when all sides are heard, the full story looks very different from the version presented by the child welfare agency.