Churnalism at the Fox News of child welfare

A “news story” about an alleged prevention initiative by New York City’s child welfare agency is little more than an agency press release.

Nine years ago, British journalist Nick Davies coined the perfect word to describe a disturbing phenomenon in media: churnalism. It means taking an organization’s press release, adding little or nothing, rewriting it a bit and presenting it as a news story.

For a classic example, look no further than the Fox News of child welfare, the so-called Chronicle of Social Change.  Yesterday, they published a story about what is said to be a new prevention initiative launched by New York City’s child welfare agency, the Administration for children’s Services (ACS).

Click this link (not the photo) to read the story. 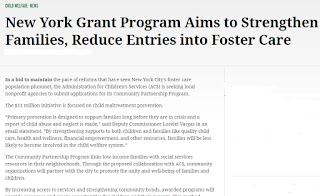 Click this link (not the photo) to read the ACS press release. 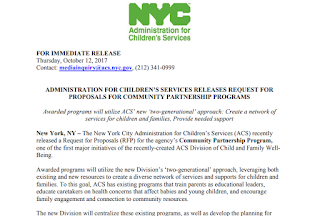 Not a whole lot of difference, is there?

The initiative might be a good idea – or not

The prevention initiative discussed in the story / press release might be a very good idea.  Then again it might not. By relying solely on vague descriptions from people at ACS, the story leaves readers no way to tell.

Primary prevention can mean many different things. Will this initiative simply be more “counseling” and “parent education” – services primarily designed to make the “helpers” feel good?  Will it be a backdoor method of spying on families, exposing them to even more “mandated reporters” of child abuse?

Or will it involve replacing this dominant “public health” approach to child welfare with a “social justice” approach - linking families to concrete help to ameliorate the worst aspects of poverty, such as child care or housing assistance?  The comments from ACS hint that it may be more like the latter. If so, this could be a real step forward.

On the other hand, the press release claims that the initiative is “ACS’ first funded, community-based initiative committed to partnering with local communities to support child and family well-being,” a claim duly repeated in the story.

More than a decade ago, ACS and a group of foundations partnered on an outstanding prevention initiative called Bridge Builders in the Highbridge neighborhood of the Bronx. It was highly successful, and NCCPR received a grant from one of the foundations, the Child Welfare Fund, to assist in production of a report about the program’s success.

ACS responded to this success by severely cutting the program’s budget.

The fact that the press release does not mention Bridge Builders, while describing the supposedly “new” initiative as a first raises questions about whether this will be a similar initiative or something geared more toward providing the wrong kind of help.

The story should have at least tried to answer these questions.

New York City is unusual in the breadth and depth of its advocacy for families. There are groups such as the Child Welfare Organizing Project and a network of high-quality providers of legal services for families. What do these groups know about this project? What do they think of it? Did ACS consult with any of them?  If not, how can it be a real prevention initiative?

But, as usual, when it comes to the Fox News of child welfare, voices of the families themselves are not heard.

To the extent that the Chronicle story adds anything to the press release, it’s still only ACS’ side of the story, and the account is, in some respects, misleading.

We’re told about the enormous progress the agency has made in reducing the number of children in foster care over the past 20 years.  The story begins by referring to the initiative as “a bid to maintain the pace of reforms that have seen New York City’s foster care population plummet…”

Later the story says “The effort is consistent with the city’s general trend of reducing entries into foster care, and reinvesting in prevention services.”  This is accompanied by a graphic supplied by – yes, ACS itself.

Some of these claims are, in fact, true. There has indeed been a commendable long-term decline in the number of children in New York City foster care on any given day – with no compromise of safety.

There also has been a commendable long-term reduction in entries. But that reduction has been less consistent. There were foster care panics that sent entries way up from 1996 through 1998 and from 2006 through 2009.  And there is a foster-care panic underway right now.  Not only has the pace of reform not been maintained in this regard, at the moment it’s being reversed.

As for the increase in preventive services:

● The foster-care panic stopped the increase. Between October 2016 and May 2017, the number of such cases was down 20 percent compared to the same period the year before.

● Even the long-term figures touted by ACS raise questions. If the “services” are simply hoops families must jump through – again, typically “counseling” and “parent education” -- they sometimes do more harm than good.

● There is considerable controversy in New York City over whether ACS is really investing enough of the savings from reduced foster care in prevention.

But, of course, you’re not going to know any of this if you rely for information about ACS solely on ACS – or if you rely on the Fox News of child welfare.
Posted by National Coalition for Child Protection Reform at 9:12 AM