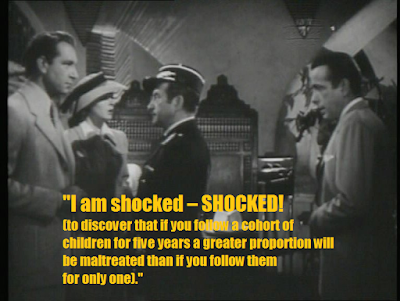 Imagine you read an article that began like this:
“A reckoning is coming in gerontology. New studies show that when a group of 95-year-olds is followed for five years, a greater proportion die than when they are followed for only one.”
You’d probably think it was a story from The Onion. You’d probably think the same if you read a story saying that people followed for five years, versus those followed for only one, are more likely to catch cold, fall in love, get in an auto accident, take a dream vacation, or discover the presence of gambling at a certain café in Casablanca.
And yet we are supposed to be shocked – shocked! – when a study that follows children for five years finds more of what authorities define as abuse and neglect than studies focusing on a single year.
Aside from the reference to gerontology, I didn’t make up that line about “A reckoning is coming…”  It’s straight from the first words in a Chronicle story about a California study released by the Children’s Data Network (CDN), which matched birth records to child abuse reports over a five-year period.
That story also quotes this from the CDN website:

“[One-year] estimates give the impression that only a small share of children are maltreated or placed in foster care, whereas cumulative estimates demonstrate the true severity of the risks and the resulting public health burden.”

But no one has ever suggested that one-year studies are meant to capture the full extent of the problem. Rather, looking at a single year allows us to return year after year to determine a trend.

It’s how we know that child abuse almost certainly is decreasing.

Nevertheless, the problem of child abuse is serious and real. And I agree with my fellow tax-and-spend liberals that we don’t spend enough to prevent it.
Unfortunately, the misuse of studies like this one to fuel the child abuse hype machine is likely to prompt two outcomes:
Funding diverted from the best options for curbing maltreatment, such as concrete help with housing and day care, and evidence-based, intensive family preservationservices.

Money pouring into bad options, such as investigating even more families – as the so-called Commission to Eliminate Child Abuse and Neglect Fatalities wants to do – and more foster care and institutions.

CDN’s five-year study suffers from the same flaw as the one-year studies: a reliance on official definitions of maltreatment, definitions that make it easy to confuse poverty with “neglect.” And “neglect” constitutes the overwhelming majority of maltreatment reports.
California’s definition states that a child has suffered neglect if the child has suffered or is at risk of suffering harm or illness as a result of, among other things: “the failure or inability of the parent or guardian to adequately supervise or protect the child.”

Translation: Mom has to work and leaves the child home alone.

Or: “The willful or negligent failure of the parent or guardian to provide the child with adequate food, clothing, shelter, or medical treatment.”
Translation: The parents are poor.

That’s how you can wind up with cases like these from Los Angeles:
Gilbreania Wallace was taken from her grandmother when the pipes in their rented house burst, flooding the basement and making the home a health hazard. Instead of helping them find another place to live, the Department of Children and Family Services placed Gilbreania in foster care. She died there, allegedly killed by her foster mother. (DCFS, which would spend nothing to move the family, offered $5,000 for the funeral.)

Dakota Prince, age 5, and Nehemiah Prince, age 3, were taken from their mother because of what the DCFS deputy director at the time called “just an inability to provide adequate care.”  They were placed with a foster mother who could afford the best – including a Cadillac Escalade.
One day she forgot that she’d left the children in the Escalade in 100-degree heat where, a deputy district attorney said, “they cooked inside the car and died.” The foster mother was convicted of involuntary manslaughter.

Of course, a neglect definition this broad also can encompass sadistic acts of extreme and even fatal neglect. But since fatalities are, fortunately, a tiny percentage of all cases, the oft repeated fear mongering about how “more children die of neglect than abuse” tells us exactly nothing about typical neglect cases.

And the CDN study doesn’t just count cases where the allegation was true. When this study finds that 15 percent of children born in 2006 were reported for child maltreatment over five years, it means only that 15 percent of children were subject to someone – anyone – picking up a phone and expressing a suspicion that a child just might be maltreated under definitions as broad and vague as those above.
This also is why there is so much less than meets the eye to other study findings:
§  The not-so-shocking finding that a lot of children are re-reported. If a family is reported for being poor when the child is age one, there’s a good chance the family will still be poor when the child is four, and it should come as no surprise if the family is reported for being poor once again.
§  The not-so-shocking finding that very few children subject to reports actually received any “services.” This is partially because we do not, in fact, spend enough on helping poor families. It’s partly because the limited available funding tends to be scarfed up by a foster-care industrial complex that feeds off a steady supply of children placed in expensive foster homes, more expensive group homes and ridiculously expensive institutions.

And it’s partly because so many of those initial reports were, in fact, false reports. (For reasons discussed above, the fact that many children are reported again does not mean the initial report was valid.)

But there is one finding in CDN’s study that truly has not gotten enough attention. By the time a California child is just five years old, odds already are one in ten that he’s been subjected to the trauma of a child abuse investigation (based on the figures in the CDN study, minus the average percentage screened out). In poorer neighborhoods in Los Angeles, it’s above 15 percent. Now imagine what the chances are throughout his entire childhood.
In short, what this study really tells us is the extent to which child protective services has become a terrifying – or to use Baltimore City Department of Social Services Director Molly McGrath Tierney’s apt word – oppressive force in impoverished communities, especially communities of color – harming the overwhelming majority of the children subjected to their scrutiny.

Some people view this study as a child saver’s white middle-class rescue fantasy come true: evidence that children are taken only from horrific circumstances and consider themselves “lucky” to be in foster care.
About one-quarter of these foster youth clearly did suffer serious physical abuse at the hands of a caretaker. But other categories combine maltreatment that is clearly serious with conduct that may or may not be serious. Still other categories, such as “Youth missed school to care for family member or do chores” can once again be an indicator of poverty, not maltreatment.
And in reporting rates of sexual abuse, the study combines alleged abuse by a caretaker with abuse by anyone.
The study also depends on the recollections of the young people, which can cause errors in both directions. Some may not know how bad things really were at home when they were taken, sometimes a decade or more earlier. But others may be basing their statements on what they’ve been told by a succession of caseworkers.
Another column in The Chronicle of Social Change argues that because 57 percent of those surveyed said they were “lucky” to be in foster care, that means a majority of removals in California are justified.

There are several problems with this assumption:
§  Ten percent of the original random sample could not be interviewed because they had run away, were in jail or had returned home. I think they would be less likely to view placement as “lucky.”
§  The remaining young people were interviewed while still in foster care. I’m sure they were promised their individual answers would be confidential. Nevertheless, after the interview, they had to return to the foster home or group home and face the foster parents or staff. That’s an inherently intimidating prospect.
One need only contrast the CalYOUTH findings to a major study of young people questioned after they’dleft foster care, and two studies ofactual outcomes to see the problem.
§  Most important: If children really are removed from their homes only when it is absolutely, positively essential, shouldn’t the proportion considering themselves lucky be closer to 100 percent? If we’re really going to use perception as a sole guide to reality, then by that same logic this figure “proves” that 43 percent of California foster children never should have been taken away.

This analysis originally appeared as part of a series in the Chronicle of Social Change series entitled: “Dollars and Priorities: The Financing of Child Welfare” where it can still be found - for the moment. Since the Chronicle, the Fox News of child welfare, has taken to suddenly moving much of my work behind a paywall, I'm reprinting it here, with some changes to the links and the inclusion of the illustration at the top - which the Chronicle censored from the original post.
Posted by National Coalition for Child Protection Reform at 10:09 PM