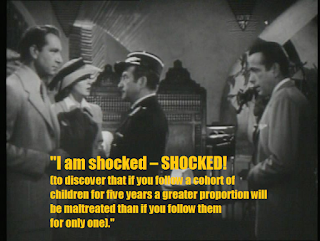 Imagine you read an article that began like this:

“A reckoning is coming in gerontology. New studies show that when a group of 95-year-olds is followed for five years, a greater proportion die than when they are followed for only one.”

And yet we are supposed to be shocked – shocked! – when a study that follows children for five years finds more of what authorities define as abuse and neglect than studies focusing on a single year.