A middle-class adoptive mom’s unusual response to being falsely accused of child abuse: "I learned a lot about the less privileged. I learned a lot of empathy."

It happens over and over. Foster parents and, to a lesser extent, adoptive parents complain about how badly they are treated by child protective services agencies.  Decisions are made about the children in their care without consulting them, they say. They’re not treated as part of a team, they say. They’re even victimized by false allegations of child abuse, they say.

I don’t begrudge them that.  A lot of the time, their complaints are justified. 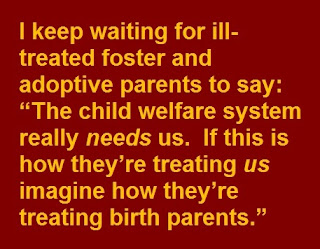 It’s not that it never happens. When Maine foster parent Mary Callahan noticed that almost every child placed with her could have remained safely in their own home had the birth parents simply gotten the aid she received as a foster parent, it helped change an entire state foster care system.

But such instances are few and far between. When one turns up, it’s worth highlighting, even when it happened five years ago, and I missed it at the time.

So I want to offer belated thanks to Dr. Christine Deeths, formerly of Bakersfield, California, to her lawyer Shawn McMillan, who has championed families in many similar cases in California, and to former Bakersfield Californian columnist Lois Henry who wrote about what happened to Dr. Deeths’ children.

The details concerning what Kern County Child Protective Services did to doctor Deeths’ adopted children are in this column by Henry, so I won’t go into them here. Suffice it to say that it falls into one of those rare categories of cases in which the overreach of child protective services hits the middle class.  And suffice it to say the needless removal of the 4-year-old and 6-year-old children was so outrageous that the county offered Deeths a settlement of $1.4 million – before she even sued.

My children will never be the same. They lost their innocence the day they were taken. CPS stole that from them and it can never be replaced.

But instead of taking pains to claim she was different from people who typically get caught up in the system, Dr. Deeths realized how much she and they had in common.  As Henry writes: 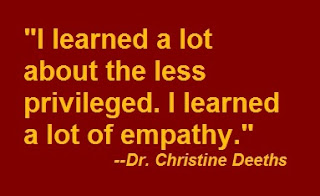 As part of the original CPS case, Deeths was ordered to attend parenting classes put on by Human Services. The classes themselves were useless, she said. But she met dozens of parents who, like her, had lost their children. Unlike her, however, they weren't nearly as educated nor did they have the same resources, money, strong family support, friends, colleagues, etc.

She had the resources to fight CPS, she said, when most other parents don't. She wonders how many more families have been unfairly torn apart.

"A lot of what they're taking kids for is a lack of knowledge about life skills and CPS isn't helping parents learn those life skills," she said. "Meanwhile they're creating generational problems because when you take a child, they're changed forever.

"They're creating a cycle."


If only more middle class people who encounter the child welfare system had that kind of empathy.