Reporters in North Carolina exposed the practice of child welfare agencies blackmailing families into giving up all their rights and letting them take away children with no court review at all.

The only thing unusual about this is that, in North Carolina, it’s illegal. Elsewhere it’s standard operating procedure.

I have often written about the lack of due process in proceedings involving child protective services.  CPS agencies can and often do take away children entirely on their own authority. Parents then have to go to court days later to try to get their children back.

The standard of proof is not beyond a reasonable doubt as in a criminal proceeding, or even the middle standard, “clear and convincing.” Instead, CPS need merely persuade the judge that it is slightly more likely than not that the child needs to remain in foster care – the same standard used to determine which insurance company pays for a fender-bender.

The judge usually is easy to convince. That’s because the judge knows that he can hold hundreds of children in foster care needlessly and while this will do enormous harm to the children, the judge is safe. Return one child to a home and have something go wrong and the judge’s career could be over.

But in many cases across the country, even this doesn’t stack the deck enough to suit CPS agencies.  So they’ve resorted to something else: blackmail, typically using a parent’s own extended family as bait.

They don’t call it that, of course. Usually it goes by a term such as “safety plan” or “parental child safety placement” or “custody and visitation agreements.”

Here’s how it works: The child protective services worker says to a parent: Sign this document allowing us to place the child with an extended family member or we’ll take the child on the spot and place the child with total strangers. (If that’s not enough, they might ratchet up the threat, saying they will proceed immediately to termination of parental rights.)

CPS then argues, with a straight face, that the placement was voluntary – the family chose to give up any rights they may have to a lawyer and court review.  In fact, these placements are about as voluntary as a mugger sticking a gun in your face, saying “give me your money” and then telling the judge “I didn’t mug the guy, he gave me the money.”

What the AP reporters found

All of this brings me to what two enterprising Associated Press reporters, Mitch Weiss and Holbrook Mohr found in Cherokee County, N.C.  But let them tell you:

When Brian Hogan got a call that his wife had suffered a massive heart attack, he knew he had to get to the hospital fast. So Hogan asked his neighbor to take care of his 10-year-old daughter, then headed 60 miles east to the intensive care unit in Asheville, North Carolina.

Hogan said the Cherokee County Department of Social Services threatened to throw him in jail, place his child in foster care or give his daughter to another family for adoption if he didn’t sign a “custody and visitation agreement,” known as a CVA.

“They gave me no choice,” said Hogan, 38, who told AP that child-welfare workers wanted to remove his daughter because they believed he placed the girl in an “unclean” home while he was caring for his hospitalized wife.

AP found that the county “did the same thing with dozens, possibly hundreds, of other parents…”

The extent of the blackmail

But that’s just the tip of a very large iceberg.

In North Carolina, individual counties run child welfare with supervision by the state. To its great credit, the state Department of Health and Human Services says what Cherokee County did was illegal and ordered counties not to do it.  A judge also ruled the practice illegal.  And, in a follow-up story, AP reports that the state is going to take over the entire Cherokee County child welfare system. 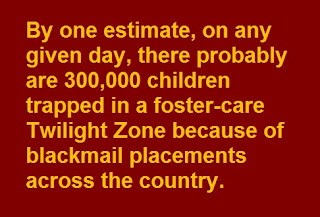 But it’s a different story in much of the rest of the country.  One reason we don’t know how many blackmail placements exist is because states often don’t report them to the federal government as entries into foster care – even though federal regulations make clear they should be counted.

But by one estimate, on any given day, there probably are 300,000 children trapped in a foster-care Twilight Zone because of blackmail placements across the country – that’s over and above the more than 400,000 children states admit to holding in foster care.

In Texas nearly two-thirds of entries into foster care probably are blackmail placements.

In Illinois, blackmail placements have been the subject of repeated lawsuits that lead to settlements. Then the child welfare agency violates the settlements.

So to really understand the harm done to children by blackmail placements, take the pain inflicted on Brian Hogan’s daughter and multiply it – hundreds of thousands of times.