Parking place “shelters” help the helpers, not the children

When writing about child welfare I often cite an old Peanuts cartoon in which the characters are gathered around Snoopy’s dog house trying to figure out how to keep him warm when he sleeps on the roof on cold winter nights. 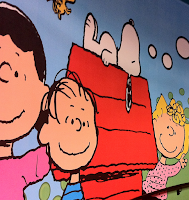 Finally, Linus offers up a suggestion: “Why doesn’t he just sleep inside the doghouse?”  The other characters roll their eyes at the absurdity of the idea.
The latest bit of child welfare news to bring this to mind is Daniel Heimpel’s plea to save one of the worst forms of “care” for young children – a parking place shelter (albeit an “award-winning” shelter).

It seems the State of California dared to question the idea of warehousing children in such institutions for more than 24 hours. The state is right.
Shelters are dumping grounds for overloaded child welfare systems. Sometimes they’re very pretty dumping grounds with lots of well-meaning people. But that doesn’t change the fact that, instead of a home, children are cared for by shift-staff dispensing indiscriminate pseudo-love to whoever comes in the door. They’re also “assessed” by “trained staff” of course, in order to prepare them for exactly what they would have gotten without the shelters – usually a succession of foster homes.
“Shelters” may be the second most sacred cow in all of child welfare – right after CASA – and no wonder. Donors love them. They can get a plaque on the wall for giving money or furniture or, if they’re really rich, donating a whole building.

The volunteers love them. They can turn real flesh-and-blood human beings into human teddy bears who exist for the volunteers’ gratification and convenience, even as they convince themselves they’re helping children. When they get bored with their human teddy bears, they simply hand them back to the shift staff.
In short, they’re good for everyone but the children.
Shelters are exercises in adult self-indulgence and self-delusion. This can be seen in the fact that so often the shelters are for younger children only. All the same rationalizations apply to older foster youth, but they’re not nearly so cute and huggable, so the adults aren’t interested in “sheltering” them.
As with any form of institution, and that’s what shelters are, a whole rationalization industry has grown up around them.

And so, the chief defender of the “Children’s Welcome Center” in Los Angeles, Dr. Astrid Heger, offers a series of claims with no actual data to back them up. She tells us, for example, that if Los Angeles dares close her shelter, “rates will go back up of [sic] reabuse.” But according to the excellent database maintained by the California Child Welfare Indicators Project, the rate of re-abuse didn’t go down in the years since the shelter opened – it stayed the same.

In contrast to Heger’s unsupported claims, Connecticut actually launched a comprehensive study of its parking place shelters.
The study found that children who went through the shelters tended to have worse outcomes than those who went straight to foster homes. The only thing the shelters were good at was wasting huge sums of money. As usual in child welfare, the worse the option for children, the more it costs.

Just like other shelter defenders, Heger is interested only in keeping the shelter for the cute kids – she’s just fine with dispensing with another one in the same building for older youths, even though, if shelters had any real value, they’d be equally valuable for both. After all, don’t older kids need to be “assessed” by “trained staff” just as much as younger kids?
Sure, the L.A. shelter for the older youth quickly became a hellhole, but if shelters really are so great their proponents should be advocating for fixing the problems, instead of dispensing with the whole shelter idea once the children no longer are as adorable. But it’s so much harder to turn a teenager into a human teddy bear.
Like most people in child welfare, Heger means well. But Heger’s own “solution” shows a startling lack of understanding of the emotional trauma children endure when they undergo multiple placements: If the child is still at the shelter after 24 hours, she says, uproot the child and place her or him in another institution – a “decompression center” for 72 hours, before finally, in theory at least, moving the child to an actual family.
Or, maybe it’s not so startling, considering some serious errors she’s made in the past.

But the Los Angeles County Department of Children and Family Services isn’t actually proposing a better idea. DCFS wants to dump the children in four new shelters run by private agencies and officially licensed to do what the current shelter does unofficially: warehouse the children for up to 72 hours.
In fact, none of these options would be needed if Los Angeles simply stopped taking away so many children in the first place. But one can see how this option might not get on the agenda if, like Heimpel, you simply declare as fact that all of the children are “passing from their abusers’ to DCFS’ hands.” At least now that Judge Heimpel has decreed every parent who loses a child to DCFS to be guilty we can dispense with that big, expensive court system.
But other cities know better.
[THESE DATA HAVE BEEN UPDATED SINCE THIS POST ORIGINALLY APPEARED] Compare the rates at which children are taken from their parents in America’s ten largest cities and their surrounding counties and the rate of removal Los Angeles is third highest, more than 40 percent above the ten-city average, even when rates of child poverty are factored in. The rate of removal in Los Angeles is well over double the rate in New York City.

Anybody have any evidence (not competing horror stories, actual evidence, please) that Los Angeles children are well over twice as safe? The rate of removal in Los Angeles is more than triple the rate in metropolitan Chicago – where independent court-appointed monitors say that, as foster care has been drastically reduced, child safety has improved.
Anyone seriously want to claim L.A. children are more than three times safer from abuse than Chicago children?
Get the children who don’t need to be in foster care out, and there will be plenty of room in good, safe foster homes for all the children who really need to be there – and no child will need to be parked for days in a shelter.


But that’s absurd, right?  As crazy as suggesting that Snoopy sleep inside the doghouse.
Posted by National Coalition for Child Protection Reform at 6:10 PM